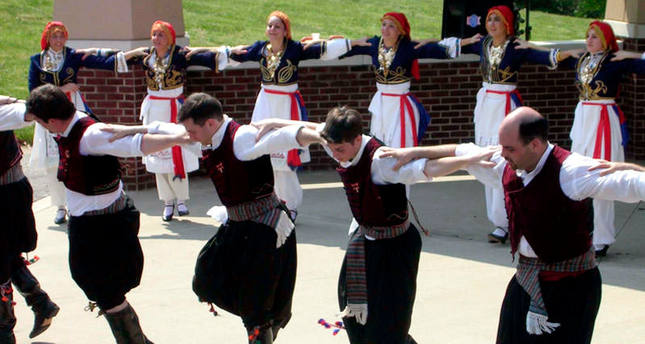 Many Greek folk dances go way back to the days of the Byzantine Empire, and as a result are still very popular among Turkish people, says a Daily Sabah report.
Today, when Turks refer to Greek dance, the focus is not on traditional Greek folk dances like Kalamatianos, Ballos, Zonaradikos, Ikariotikos or Pentozali, but rather Sirtaki, which is a mixture of slow and fast versions of Hasapiko (The Butcher’s Dance). “Zorba the Greek” by Mikis Theodorakis is a classic Sirtaki.
The origins of Hasapiko stretch back to the Byzantine days. The dance was adopted by the butchers’ guild in Constantinople and maintained popularity into the early 20th century, mostly among the butchers who resided in Istanbul’s Balat and Fener quarters in a primarily non-Muslim community. Today, Hasapiko — a word derived from the Turkish word “kasap” — is a widely recognized form of folk dance across the country, which Turks refer to as Kasap havası, says Daily Sabah.
Bahattin Bayburan, founder and trainer at FasaFisa Dance School based in Istanbul, told Daily Sabah that “The interest in common Turkish and Greek dances; mostly Hasapiko and Tsifteteli, has never fizzled out.” “Greek citizens that had to leave Turkey during the 1923 population exchange brought these dances to Greece, where they are still a form of entertainment, performed at various social venues.
“In Turkey, Greek taverns offer visitors a chance to watch Turkish people dancing Sirtaki,” he said, adding that even the names of some cultural references in Turkish and Greek have similarities. “We share similar pronunciations of certain names. We refer to a yogurt sauce as ‘cacık’ while Greeks call it ‘tzatziki.’ You can observe the same similarities in dance names. Add the suffix ‘iko’ to the ends of some dance names such as hasapiko and find its Greek name. Also, they refer to one dance as Zeibekiko, while we call it Zeybek dance. Another example is the Çiftetelli dance, which Greeks call Tsifteteli Turkiko, directly referring to Turks,” Bayburan said.
Bayburan stressed that dance will remain a common value between Greeks and Turks.