GRNews
GreekReporter.comGreeceThe Real March 25th and Greece's Liberation Is Not Like We Know... 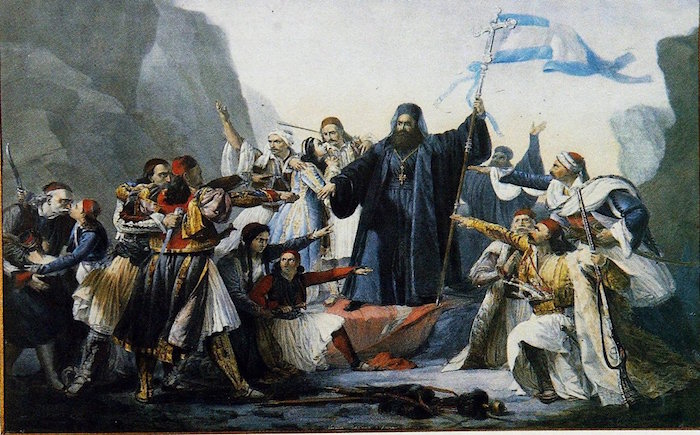 For us Greeks, March 25, 1821 is a date that fills us with national pride. It marks our liberation from Ottoman rule and the start of the independent, modern Greek state.
Yet historians beg to differ, ruining a good myth, as they often do. Well, historians say that absolutely nothing happened on March 25, 1821. Not the hoisting of the flag at Aghia Lavra Monastery or the oath given by the brave fighters and their blessing by Metropolitan Palaion Patron Germanos.
Yes, a few shots were fired here and there and a few skirmishes took place. But nothing that would be described as a revolution or even an uprising.
Historians claim that the Aghia Lavra incident is a national myth. We owe that myth to French traveler and historian François Pouqueville (1770-1838), who wrote a four-volume History of the Hellenic Renaissance while in America in 1824. The story spread by word of mouth, but also through the painting table The Oath at Aghia Lavra (1851) of important Greek painter Theodoros Vryzakis (1814-1878).
Not even Palaion Patron Germanos himself ever wrote about the Aghia Lavra story in his memoirs. It is historically established that the revolutionaries were never at the Aghia Lavra Monastery, but in Patras, where they gave their oath to the Metropolitan at the city’s ​​St. George Square.
The celebration of the national uprising on March 25 was established on March 15, 1838 by King Otto, who wanted to link it with the ecclesiastical event of the Annunciation. It was the desire of Alexandros Ypsilantis and the Filiki Eteria (Society of Friends) to link the start of the revolution with a great church celebration to boost the morale of the enslaved Greeks.
In fact, the Revolution did not begin on March 25, 1821, but a few days earlier in the Peloponnese, a region with compact Greek populations and small military presence of the Turks. The military and political commander of the Peloponnese Hoursit Pasha was at Ioannina to kill Ali Pasha, who had become autonomous from the Porte, the central government of the Ottoman Empire. Before his departure, the Hoursit had received assurances from the notables of Peloponnese that the rumors circulating about the impending uprising of slaves was unfounded.
People of Achaia and Mani disagree about who fired the first rifle shot of the national uprising. March 21 marks the siege of Kalavryta by Sotiris Charalambis and the Petmezas clan. It is the first act of the independence war Revolution and ended victoriously five days later.
On March 23, Mani under the leadership of Petrobey Mavromichalis and the support of Theodoros Kolokotronis conquered Kalamata and their proclamation made Greece’s uprising known to the international community. On the same day, the men of Andreas Londos took control of Vostitsa (modern Aigion), while the revolutionaries prevailed in Patras.
March 23rd is essentially the first milestone of the national struggle and could well have taken the place March of 25 in the Greek historical calendar.