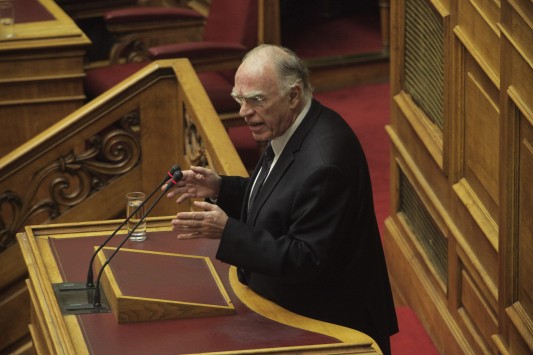 Centrists Union leader Vassilis Leventis called on Prime Minister Alexis Tsipras to resign and form an all-party government during his speech on security fund reforms.
Leventis’ colorful language and straightforward talk made his 30-minute speech in parliament viral, while it was often that the plenary burst out laughing.
Leventis proposed to combine all pensions into one, cut all pensions over 1,500 euros, stop pensions to former MPs and cut pensions of those who have other sources of income.
“I don’t understand how you can give the same pensions on a smaller budget. This is utopian. You at SYRIZA claim you will not cut pensions. If you won’t cut pensions, why don’t you leave the old pension system alone then. If you give the same pensions on a smaller budget, then you are magicians,” Leventis said.
“If you think you can manage that, then go out and speak to your constituents. They will beat you up,” he said amid applause from the opposition. “I want to see if you can go out and talk to the farmers and workers,” he said.
Addressing SYRIZA MPs, the Centrists Union chief said that the prime minister promised them there will be a debt haircut if they vote for the unpopular reforms. Leventis told them there will be no debt haircut, only a loan extension.
Addressing the Greek Communist Party (KKE) he told them that they were traitors in 1989 when they allied with New Democracy and then prime minister Konstanstinos Mitsotakis, father of Kyriakos Mitsotakis. He said that for their action they were rewarded with pensions of “resistance fighters.”
KKE deputies reacted with shouts of protest. “You are out of time and place. You haven’t understood yet that Communism has fallen,” Leventis replied.
Leventis insisted on his opinion that Greece needs an all-party government, not a fragile 153-vote majority. It is important that the European Union wants to see a strong, ecumenical government. “They won’t ease the Greek debt with a single-party government.”
“You got 35 percent in the elections, you lost half of that with the things you are doing, and [ANEL leader] Kammenos got 1 percent in a recent poll. You want to reform the country with 16 percent? Europe doesn’t take you seriously, that’s why there is still talk about Grexit,” he said.