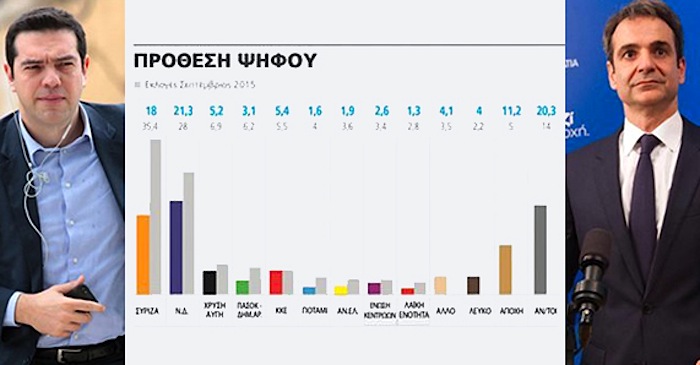 It’s only a matter of time before Greece’s SYRIZA-led government loses its political legitimacy entirely and the country ends up with yet another snap election. This is an argument I have been making virtually since SYRIZA’s rise to power.
Now, a poll by Metron Analysis in Greece shows that for the first time in a rather long time the conservative party of New Democracy leads by 3.7 points over SYRIZA.
The reasons for this development are quite simple and go beyond Kyriakos Mitsotakis taking the reins of New Democracy, although the latter renewed confidence among conservative voters in their party’s future.
Greek Prime Minister Alexis Tsipras’ betrayal of his campaign promises to Greek voters would simply not be forgiven by voters. This is the way democracies really work.
To be sure, Tsipras’ somersault on austerity and the EU/IMF bailout program sent shock waves through the ranks of the Left in no time, but it was only a matter of time before the non-left voters also felt the bitter sense of betrayal.
After all, non-left voters cast support for SYRIZA not out of ideological affiliation with the vision of the radical Left in Greece (and by now it is crystal clear that the so-called radical Left had no vision for Greece other than to attain power so it could enjoy the perks and privileges that come with being a governing party), but simply because they felt it was time to give an untested political party the chance to govern the country even in hollow hope that it can put an end to the continuation of the old policies of the preceding governments.
Metron Analysis’ poll shows New Democracy receiving 23.6% of the votes, while SYRIZA gets only 19.9% if elections were to be held today.
The neo-Nazi party of Golden Dawn receives less that 5%, and so does the Greek Communist Party (KKE).
The biggest political voice in Greece will continue being the abstention vote as the depth of the crisis and the loss of hope in the future among badly battered citizens take their toll on democracy’s most fundamental function, which is active participation and citizen engagement in public affairs.
In the last national elections, over 40% of the citizens stayed away from the polls. Indeed, along with the collapse of the economy and increasing social misery, the so-called bailout plans have also brought about the death of democracy in the land that gave birth to the “worst form of government, except for all the others,” as Winston Churchill is claimed to have said.