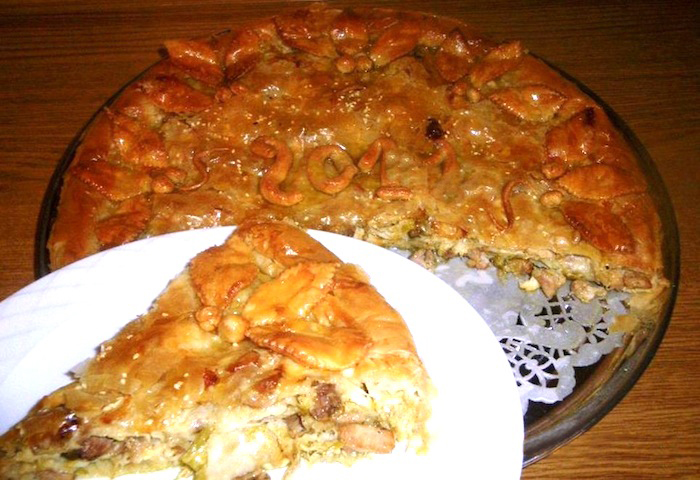 The New Year’s cake — commonly known as vasilopita — recipe varies depending on the place of origin. It is not always sweet which may seem peculiar to certain Greeks, especially those who live in the capital or abroad.
In Epirus, the vasilopita is a savory pie, which was developed as a tradition thanks to the local shepherds. In Metsovo, northern Greece, the people make a delicious pie filled with minced meat, while the good luck coin is hidden in the crust and not in the filling.
In Ioannina, according to an old recipe it is a tradition to make an “open pie,” filled with pork, sheep or chicken meat, lots of eggs and chopped onions.
Here is a traditional recipe for the meat pie-vasilopita:
Ingredients:
1kg pork meat cut into small pieces
1/2 kg chicken
3 large onions chopped
1 large onion whole
2 cups sweet trachana
1 1/2 cups crumbled feta cheese
3-4 cloves
2 celery
2 bay leaves
6 tbsp butter
1 tsp salt
1 tsp pepper
1 kg pastry sheets
Preparation:
1. Boil two liters of water in a large pot. Boil the whole onion, on which you should pinn the cloves, along with the bay leaves, celery, chicken and pork. Remove the foam that forms on the surface. Cover the pot and let to simmer for 35-40 minutes. Pull the meat out with a slotted spoon and leave to drain and cool.
2. Take the bone out of the meat and cut it in small pieces. Fry the chopped onions with two tbsp of butter. Add the chicken and pork and continue cooking for 4-5 minutes. Pour the trachana and season to taste. Add half a cup of water and cook for 8-10 minutes.
3. Grease a pan and layer it with 3-4 leaves also greased with the butter. Pour half of the filling, and cover with a single sheet. Pour the remaining filling, then sprinkle the feta on top. Cover with 3 more greased sheets. Carve the pie with a sharp knife. Mix the remaining butter with some water and brush it on top of the pie. Bake in the middle of the oven at 180 degrees Celsius for 40-45 minutes. Allow the cake to cool before cutting it.