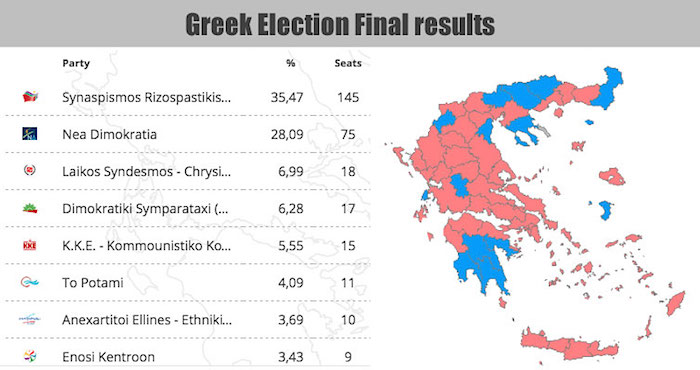 The Coalition of the Radical Left (SYRIZA) has won its second parliamentary elections in eight months having garnered 35.47 percent of the Greek vote and 145 parliament seats on Sunday. The New Democracy conservatives came in second with 28.09 percent of the vote and 75 seats.
The extreme-right Golden Dawn is Greece’s third political power with 6.99 percent and 19 seats. The center-left PASOK-DIMAR alliance received 6.28 percent and 17 seats, with the Greek Communist Party (KKE) following at 5.55 percent and 15 seats.
Center-leftist To Potami is next with 4.09 percent and 11 seats, Independent Greeks (ANEL) get 3,69 percent and 10 seats. The Centrists Union follows at 3.43 percent and 9 seats.
Unprecetended Abstention
With 99.44 percent of the votes counted, 43.55% of Greeks who were eligible to vote did not go to the polls on Sunday. In real numbers this means that out of 9,836,997 Greeks who could cast their ballot, approximately only 5,562,820 people voted. This is the highest abstention rate in the history of Greek parliamentary elections following the fall of the dictatorship in 1974.
Related Infographic: Voter Turnout in Greek Elections Drops to New Historic Low