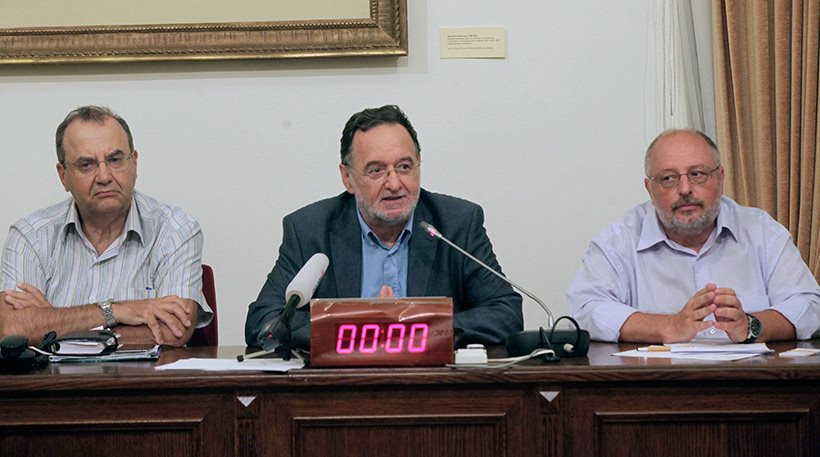 Former SYRIZA MP Panagiotis Lafazanis and leader of the party’s Left Platform announced the formation of a new leftist party called “Popular Unity.” In the press conference held in the Greek Parliament Lafazanis spoke about the party’s goals, while he openly attacked Alexis Tsipras for his decision to resign from the Greek Prime Minister post and call for early elections.
“The government took the initiative to resign and call for elections in the middle of August,” he said. “The question is, what’s the rush? The answer is obvious and we all know it…the government wants to confuse citizens and steal the vote of the Greek people. It’s an old tactic that reminds us of New Democracy and PASOK and unfortunately it is being implemented by Alexis Tsipras,” he added.
“We march towards the elections united”, said Lafazanis, adding that Popular Unity will play a significant role in the post-election developments. The party aims to be a large anti-bailout force and one of its main programmatic axes will be to achieve debt relief, put an end to the bailout era and reform the country.
When asked if his party’s goal is to return to the drachma, Lafazanis said that one of their proposals will be the exit from the Eurozone and the formation of a progressive development plan. Furthermore, he said that he had discussed with all SYRIZA MPs, especially those who did not follow the government policy. “We plan on making contact with all political forces and social organizations,” he added, stressing that this did not include the neonazi party Golden Dawn.
Greek government: ‘Panagiotis Lafazanis will be judged by the Greek people’
“Panagiotis Lafazanis and followers of the drachma supporters have divided SYRIZA and turned against the leftist government,” noted government officials in Maximos Mansion. “They will be judged by the Greek people,” the officials added.