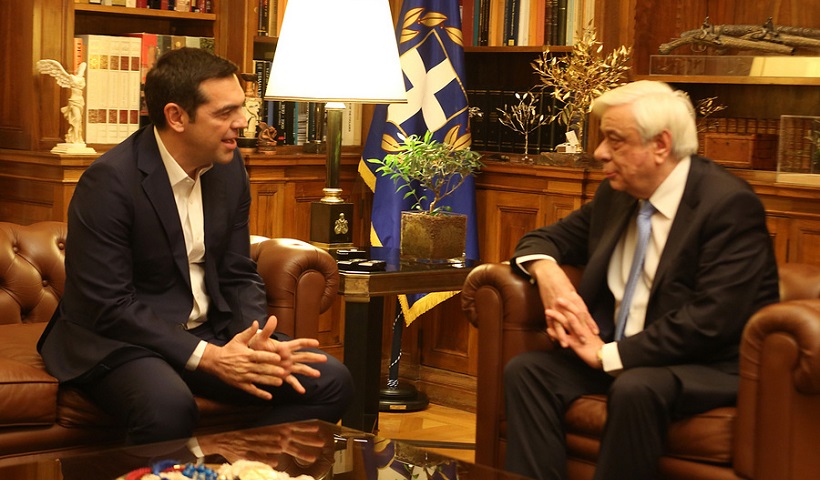 Greek Prime Minster Alexis Tsipras met with the President of the Hellenic Republic, Prokopis Pavlopoulos on Wednesday evening, before speaking with “To Potami” leader Stavros Theodoakris.
Tsipras confirmed to Pavlopoulos that Greece sent a request to the ESM for a bailout and reiterated that Greece will submit detailed proposals on Thursday.
According to Tsipras, the Greek government’s goal is to strike a balance between credible reforms and sufficient funding as well as a debt restructuring, that will help secure an exit from the perpetual crisis.
“I am fully aware that the responsibility lies with the government but I think communication with all the political powers — and of course in the supreme political level — is a precondition so we can achieve the best possible result,” he added.
Pavlopoulos noted that on Sunday, Greece will be a member of Europe and the Eurozone and that it will contribute to helping the region through the difficult days ahead.
“The referendum and the mandate of the Greek people in no way meant a clash, but the recommencement of the whole negotiation process, that has one and only goal, the unshakable presence of Greece in Europe,” the Greek President said.
Following his meeting with the prime minister and after being informed on the Euro Summit discussions,  “To Potami” party-leader Theodorakis indicated that the lines along which the political common front was formed on Monday are being followed. He also admitted that there are some people in Europe who would like to see Greece out of the EU.
“What is necessary is to persuade some of the more hesitant people in Europe that the future of Greece is at the heart of Europe,” he said.
Theodorakis added that there could be another political leaders’ meeting following the achievement of a deal.