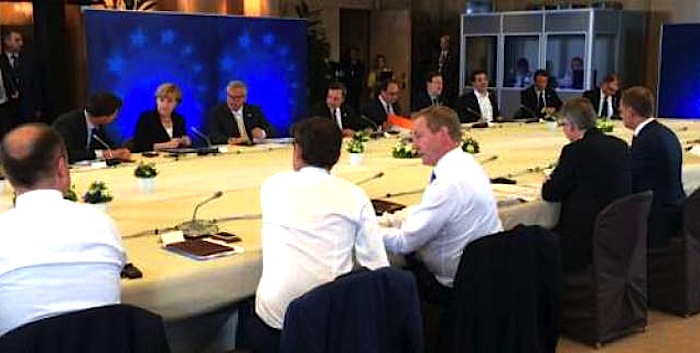 After more than three hours of talks, Tuesday’s Euro Summit decided that there will be another European Union summit this upcoming Sunday to discuss the Greek government’s new bailout proposals expected in writing by July 9.
Earlier at the Eurogroup,  the nineteen Eurozone finance ministers met to hear the Greek proposals on how to move forward. Although the proposals were described by Greece’s new Finance Minister Euclid Tsakalotos, they were never offered in writing to the Eurogroup, awaiting Greece’s formal request for an European Stability Mechanism package. A new Eurogroup phone conference will take place when the ESM request has been made.
Immediately prior to the summit there was a meeting among Tsipras, Juncker, Hollande and Merkel.
Greek Prime Minister Alexis Tsipras said that he feels confident that there will be an agreement by the end of the week. The Greek government proposals were approved by a Greek political leaders’ meeting after the July 5 referendum.
“The basic direction is a socially just and financially sustainable solution for Greece and Europe,” said Tsipras.
“This includes credible reforms with social justice as a standard, in exchange for the assurance of sufficient funding for the country’s financing needs in the medium term, a strong investment package to deal with the important problems, especially unemployment and the commencement of a meaningful discussion on the debt” he said.
The Greek Prime Minister said that he is happy to see that “everyone understands this is a European problem, and not only a Greek problem.”
Unlike the Greek Prime Minister who appeared to be more optimistic in his remarks, European leaders expressed their uncertainty about Greece’s future and the achievement of a deal.

Following the summit, German Chancellor Angela Merkel held the same perspective she did earlier in the day, namely that currently there are no grounds for an ESM program for Greece, but added that Tsipras needs to send detailed proposals and insisted that a long-term program with tougher conditions is required.
“If we begin negotiations we need to have some assurances that they will be meaningful, there needs to be a proposal” Merkel said.
“If an ESM process begins then the Commission will have to ask: is the safety of the Eurozone being risked? Can the government pay back? Can it respond? The IMF, The Commission and the ECB need to answer yes and give us the framework” she said and added that for her this would still not be enough to begin an ESM process as she would need to know exactly what the Greek government demands and what it offers to do.
European Commission President Jean-Claude Juncker expressed his desire for Greece to stay in the Eurozone but said the Commission is prepared for a possible Grexit.
“I had said that a NO would weaken Greece’s negotiating position. This is what happened today,” Juncker said.
He further argued that Europe would discuss the Greek debt sustainability issue in October, something that he claims to have told Tsipras prior to the referendum.
European Council President Donald Tusk also claimed that he wants to prevent Greece’s downfall and its bankruptcy but noted that it is possible that consensus on a deal will not be achieved by Sunday, which he set as the deadline.
“The situation is critical. We cannot dismiss the dark scenario, meaning the lack of an agreement on Sunday” Tusk said.
French President Francois Hollande appeared more optimistic in his remarks, saying that he believes a deal can still be reached but also clearly expects Greece to come up with proposals. He once again emphasised the importance of not wasting time in this effort.
Read the official statement of EU leaders after the end of Tuesday’s summit.