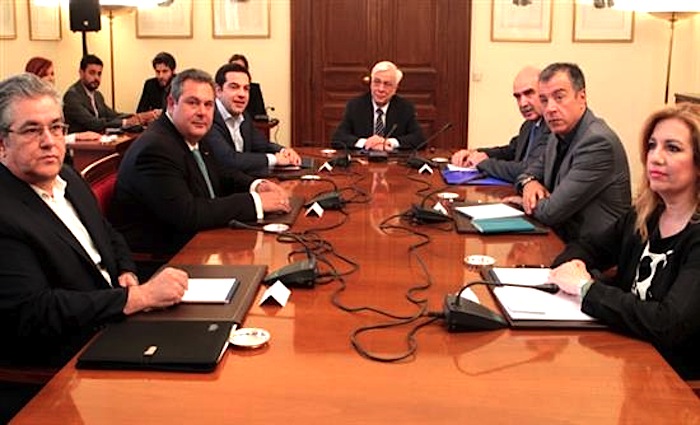 Greece’s political party leaders summit concluded after almost 7 hours of talks with an agreement for a common political front to find a solution and reach a deal with international creditors, following the “No” vote result in Sunday’s referendum.
Under the supervision of the President of the Hellenic Republic, Prokopis Pavlopoulos, the SYRIZA-ANEL coalition agreed with New Democracy, “To Potami” and PASOK to cooperate in the negotiation proposal. The Greek Communist Party (KKE) did not agree and reiterated its long held position that it rejects any bailout deal with austerity measures. Golden Dawn party leader Nikos Michaloliakos did not participate in the meeting and Golden Dawn is not part of this common front.
The Presidency of the Hellenic Republic released the official announcement signed by the 5 political leaders.
“The political leaders’ recent decision by the Greek people is not a mandate for rupture but a mandate for the continuation and the strengthening of the effort to achieve a socially just and financially sustainable agreement,” the announcement read. “The government takes on the responsibility to continue negotiations toward this direction. And every political leader will contribute respectively in the framework to their institutional and political role.”
The immediate priority is to secure liquidity for Greece’s financial system.
Beyond this first need, the announcement laid out the common goals that they wish to achieve. Namely, securing sufficient financing for Greece and having credible reforms with the least possible recessionary effects. Moreover, the 5 party leaders want a strong growth program to combat unemployment and promote entrepreneurship, and finally, a meaningful discussion to find ways to deal with Greece’s debt sustainability challenge.
Prime Minister Alexis Tsipras will inform the leaders on Tuesday’s Euro Summit developments.
Defense Minister and Independent Greeks (ANEL) leader Panos Kammenos, speaking immediately after the meeting, concluded that there will be a common announcement by all parties except KKE. Kammenos called this a “big day” for Greece, as the country’s political parties gave power to the Prime Minister to negotiate, representing all of Greece and expressed his confidence that an agreement with creditors will be reached.
“From here on, it is in Europe’s hands to understand that the solution, which is the desire of Greeks and political parties, must be given immediately so that Greece can reenter the road of growth and prosperity,” he said.
“To Potami” leader Stavros Theodorakis confirmed his support for the common front but also added that the responsibility of negotiations lies with the Prime Minister and warned that there will be difficult days with hard decisions to be made.
“We agreed that it is necessary that politicians are useful and not pleasant,” he commented on the country’s future and added “We call on the European Central Bank to see that there is an effort to start negotiations.The ECB has to take under consideration the needs of the banking system.”
Theodorakis also noted that per his suggestion the records of the summit will not become public until the current emergency situation is over.
New Democracy was represented by Evangelos Meimarakis who is acting as interim party leader after Antonis Samaras resigned yesterday, following the defeat of the “Yes” platform.
Meimarakis said that the situation is currently worse than it was 10 days ago. He stressed that there is division between Greeks, but they must stick together for a beneficial deal and urged the government to find a solution as it has promised.
PASOK leader Fofi Gennimata echoed Meimarakis’ sentiment by saying that the current situation in the country could have been prevented by the government who should have called this summit before the banks had to close. Gennimata also added that beginning negotiations and finding a solution must be necessarily accomplished by the government.
KKE leader Dimitris Koutsoumbas said that the only two possible outcomes, a new bailout deal with burdensome austerity measures or a Grexit, will both have painful consequences for the Greek people and thus the KKE does not align itself with the other political parties’ common front.
“It is proven that there cannot be a solution that is favorable toward the people within the walls of the European Union,” the KKE leader said.