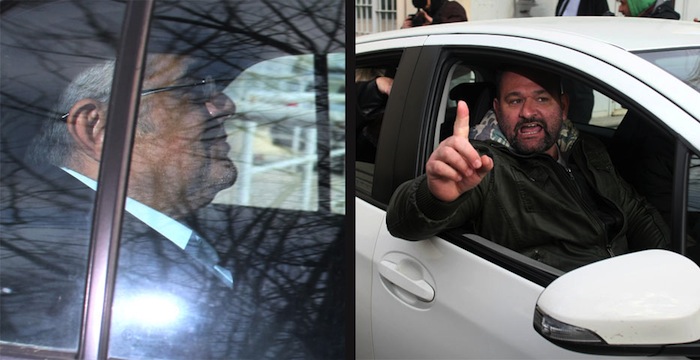 Extreme Right Golden Dawn’s imprisoned leader Nikos Michaloliakos and senior MP Ioannis Lagos, who, among others, are currently facing charges over running and belonging to a criminal organization were released from Korydallos prison today, after the 18-month pretrial custody period expired.

The Nazi-inspired party leader Nikos Michaloliakos will be kept under house arrest until he and some 70 others appear before judges later on April. Similarly, MP Giannis Lagos in order to secure his release had to post a bail of 125,000 euros and is banned from fleeing the country. Both are banned from attending public gatherings.

The trial of the xenophobic Golden Dawn is expected to begin on Monday, April 20 in a specially designed room in Greece’s largest prison, in Korydallos, Athens. Among the 70 who are charged of running and belonging to the neo-Nazi criminal organization, are its imprisoned leader Nikos Michaloliakos and also imprisoned MPs Ilias Kasidiaris, Christos Papas, Ioannis Lagos, Giorgos Germenis, Nikos Kouzoulos, Panagiotis Iliopoulos as well as ex-member Stathis Mpoukouras and one under aged person that will be tried separately. The above defendants, along with 18 others, have spent almost one and a half years in detention waiting for their trial.

In his 700-page argument, the prosecutor handling the criminal investigation of Golden Dawn, proposed that a total of 70 party members should appear before the judge. According to his recommendation, every current or former MP belonged to the criminal organization’s “hard core” that operated under the party’s cloak.

The prosecutor recited all the charges being brought against Golden Dawn, underlining the murders of anti-fascist rapper Pavlos Fyssas (a.k.a. Killah P) in September 2013 and Pakistani immigrant Luqman Shahzad in January 2013, as well as several individual assaults on foreign nationals and leftist activists, including the attack against PAME members in Piraeus, just a few days before Fyssas’ murder.

It should be noted that all 16 MPs of Golden Dawn in the previous Parliament — which was dissolved for the January 25 general elections — will appear before the judge. Thirteen of the MPs were re-elected along with four new members, making Golden Dawn the third largest party currently represented in Greek Parliament.