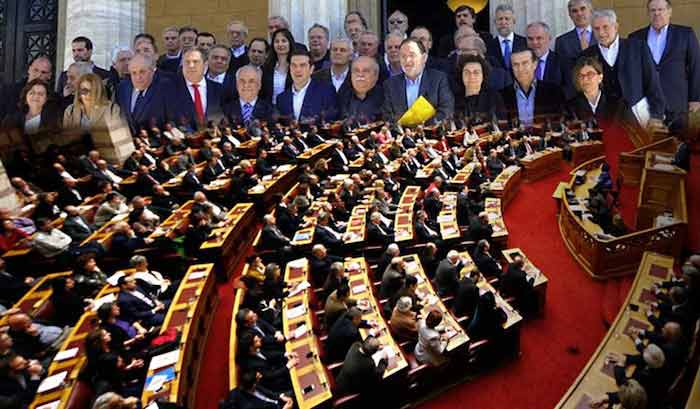 Yet another historic event occurred tonight in the Greek Parliament, where the SYRIZA-led coalition government, the first leftist government in the history of Greece, secured its first parliamentary vote of confidence after the January 25 snap elections. The newly elected government, which consists of the leftist SYRIZA and the far right-wing Independent Greeks (ANEL) parties, was backed by 162 MP’s in Greece’s 300 seat legislature, while 137 deputies voted against it. ANEL currently hold five Ministerial seats in the new cabinet.
Greek PM: Greece ‘cannot return to age of bailouts, submission’
Greece ‘s prime minister Alexis Tsipras said Tuesday that the country “cannot return to an age of bailouts and supression,” ahead of critical talks with Athens’s EU creditors.
“There is no return,” he said in a speech to parliament.
Tsipras continues to speak, noting that Greece is asking for more t-bills, smp profit returns, but no new loan, adding that the Greek gov’t won’t accept troika auditing and that Greece is being blackmailed.
Tsipras also mentioned that a debt relief is necessary as agreed in 2012, thus a solution within EU framework is what they need. While Tsipras keeps his hard-line stance, at present, it is hard to see Europe giving much concessions unless full implementation of reforms by Greece.
SYRIZA’s invitation to other parties to support its cabinet ahead of the critical negotiations with the country’s international partners -the first act of which will be played tomorrow in Brussels’ emergency Eurogroup meeting- by granting them an even wider support was finally not heard, as none of the MPs not belonging to the governmental partners reciprocated. The Secretary General of the Greek Communist Party (KKE), Dimitris Koutsoubas, did not take up the invitation to support the new government, arguing that the Greek government’s six-month “bridging program” is effectively a bailout extension, a possibility Greek Prime Minister Alexis Tsipras had ruled out on Sunday night, while presenting the new government’s plan. “We will not accept the tricks being played to confuse people,” he said, adding that the clash between the Obama-ists and the Merkel-ists is irrelevant to the people.
On his behalf, the former government Vice President and Foreign Minister of the New Democracy-PASOK coalition government, Evangelos Venizelos, criticized the new government for not communicating its plans better. As he said, MPs are being asked to support the new Prime Minister without knowing what will be offered in tomorrow’s Eurogroup.
New Democracy, “To Potami” and Golden Dawn have also refused to support the newly elected government.
FinMin Varoufakis: Greece is Entering the Post-Bailout Era
Earlier, the country’s current Finance Minister, Yanis Varoufakis, while addressing the Greek Parliament, declared that Greece is on the brink of the post-bailout era and also fixes the mistakes that caused Greece’s depression. “With tonight’s vote of confidence, Greece is entering the ‘post-bailout’ era,” he said, and while answering to Venizelos’ accusations, he ruled out accepting any bailout terms that raise Greece’s debt. Regarding the negotiations, he said that “game strategy is for games.
You do not play with Europe’s future, you do not play with Greece’s future.” In addition, he stressed that he rejects around 30% of the existing austerity program, and urged opposition MPs to support him in the Eurogroup negotiations, as “this is the first Greek government going to the Eurogroup standing upright and not walking in bowed.”
Finally, he explained that 30% of the austerity program is “toxic” and declared: “If you are not willing to even consider a clash, you are not negotiating. We are not seeking a clash. We will do everything to avoid it. But you are not negotiating if you have ruled it out.”
Former PM Samaras: We won’t let you drive us to a head-on collision
Not long before the vote of confidence process began in Parliament, Former Prime Minister Antonis Samaras addressed SYRIZA by solidly stating that “we won’t let you drive us to a head-on collision.”
Samaras said that ”whoever loves one’s country heartily wishes the new government to succeed, but we love Greece and we won’t compromise our European future.”
As for SYRIZA and its Memorandum prolongation aspirations, the Former Prime Minister stated that “we discern no sensibility in it whatsoever.”
Furthermore, he launched an attack against SYRIZA and accused the leftist party of lying and fake pre-election promises as well as for not having a proposal.
At the same time, Samaras said that he will “recognize all that SYRIZA manages to achieve,” however, “we won’t let you drive us to a head-on collision,” he added.