GRNews
GreekReporter.comentertainmentCelebritiesOnassis Brought Life to the Greek Island of Skorpios

Onassis Brought Life to the Greek Island of Skorpios 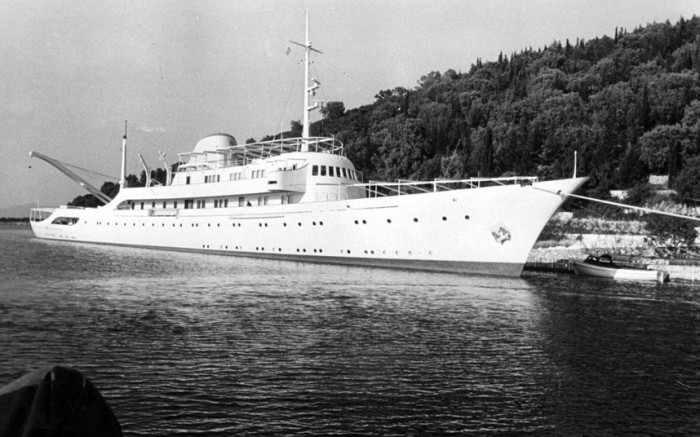 By Cliff Blaylock
Skorpios or Scorpios is a private island in the Ionian Sea off the western coast of Greece and just to the east of the island of Lefkada. The barren island was bought by Aristotle Onassis in 1963. At the time, it was believed to have cost just 3.5 million drachmas, the equivalent of about £10,000.
Spanning 74 acres, the shipping scion piped in utilities, imported sand, planted over 200 varieties of trees, and built a family compound that includes three residences, a helicopter pad and a boat quay. He also built harbor facilities in the bay on the north side for his beloved yacht “Christina.” Onassis never slept on the island but slept on “Christina” at night, although there are living quarters ashore for quest. There are some sandy beaches, most notably the east beach, which was created by Onassis who brought sand from Salamis island for this purpose. The island water comes from a mountain bought by Onassis on a nearby island, so anyone who bought the island would need to buy the mountain as well, which he estimated would cost upwards of 100 million euros.
On October 20, 1968, Onassis married former US First Lady Jacqueline (Jackie) Kennedy on the 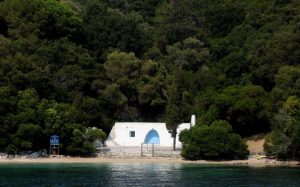 island. The island hosted many parties during Onassis’ time. On the island’s south side, at the edge of a tiny beach, in an idyllic setting, is a small Cyclades-style house Jackie had built so she could get away from it all and swim in the beautifully clear waters of the cove. This was where Jackie was infamously photographed nude by a Greek paparazzo. The shipping scion, Christina and his son Alexander, who died in a plane crash in 1973, are all buried on the island. The small chapel and graves are on the island’s northwest corner. 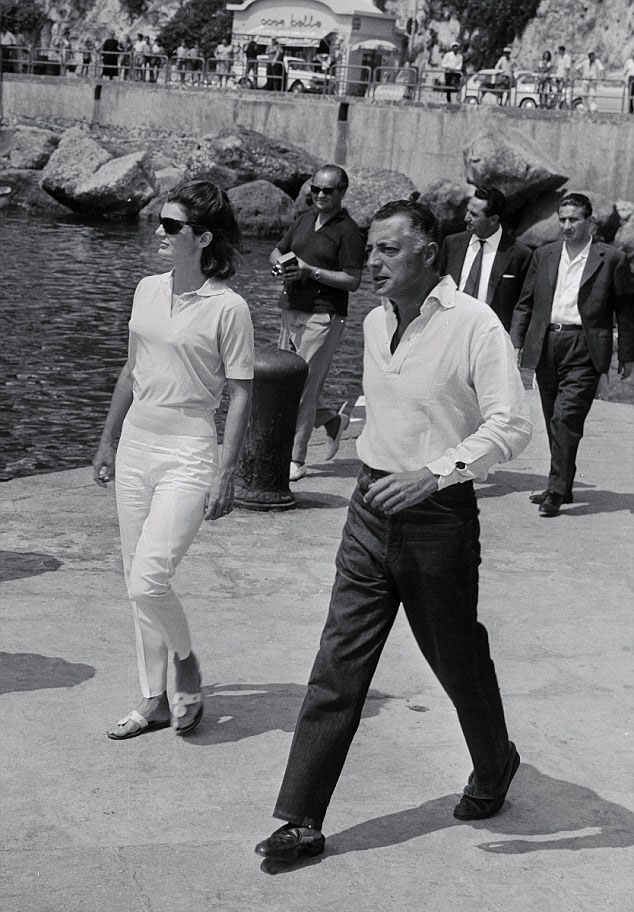 After his death in 1975, the private island passed down through the family, and in 1988, after her mother Christina died at the age of 37, the property passed to Athina Onassis Roussel, his 28-year-old granddaughter and sole living heiress. Athina was born in France, and is the only child of Christina Onassis and her fourth husband, Thierry Roussel. She is married to Brazilian Olympic show jumper Alvaro de Miranda Neto and lives in Sao Paulo.
There have been rumors in the past that fashion designer Giorgio Armani, Microsoft founder Bill Gates and pop star Madonna were interested in buying the tiny island. Swiss-educated Athina Onassis Roussel sold the island in April 2013 to Ekaterina Rybolovlev, the 24-year-old daughter of Russian billionaire Dmitry Rybolovlev. It is believed Athina had little Interest in spending time on the island, or in Greece.
The sale price is unknown, though several Greek news outlets have reported a price tag in the $150 million range. Whatever the final number, Rybolovlev can afford it. Or more aptly, her father can. Dmitry Rybolovlev is worth an estimated $9.1 billion, making him the 79th richest person in the world. His wealth is largely derived from his former ownership stake in Uralkali, Russia’s largest producer of potassium fertilizer, which he sold out of in 2010 for $6.5 billion.
Rybolovlev’s daughter is said to be acquiring Skorpios for business as well as pleasure, with reported plans to create an island retreat for the world’s rich and powerful, according to several Greek news outlets. The nearby islet of Sparti was also included in the sale. From the time Skorpios was sold to Rybolovlev, the whole area has become a forbidden zone for tourists. Specially trained French and American bodyguards with high-tech equipment guard the island 24/7.
The Greek government however, is yet to confirm the legality of the purchase by the Russian oligarch. An investigation is currently underway, as New Democracy MP Yannis Mihelakis raised the question in the Greek parliament. Specifically, Onassis stated in his will that the island would remain in the family as long as they could afford to cover its maintenance expenses. According to the will, if his descendants could not cover the expenses, the island would be donated either to Olympic Airways or to the state. Therefore the island is now leased to the heiress for 100 years, still under the belonging of Athina Onassis Roussel.
Although it is not possible to land on Skorpios, you can pass close by on a charter yacht and see this beautiful Ionian island, playground of the rich and famous.