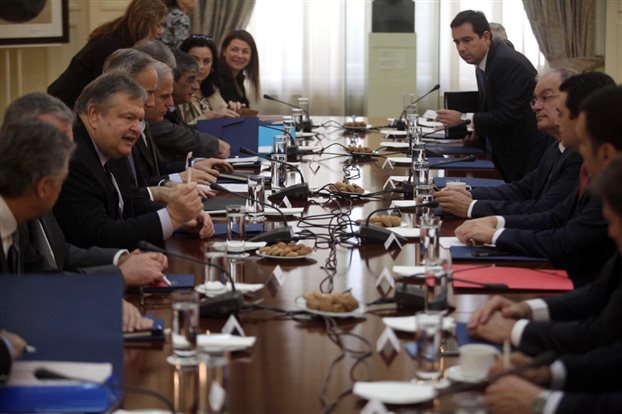 Under the presidency of Greece’s Prime Minister Antonis Samaras and his Turkish counterpart Ahmet Davutoglu, the third Supreme Council of Greek–Turkish Cooperation will meet on December 5 and 6 in Athens and government Vice President and Foreign Minister Evangelos Venizelos asked the implicated cabinet Ministers to file their proposals over the improvement and strengthening of the bilateral relations by this coming Monday, during a ministerial meeting held yesterday.
The meeting was attended by the Ministers of Culture, Kostas Tasoulas, Tourism, Olga Kefalogianni, Public Order, Vassilis Kikilias, Justice, Charalampos Athanasiou, Development, Kostas Skrekas, Maritime, Miltiadis Varvitsiotis and Transport, Michalis Chryssochoidis, while Ministers of Energy, Environment and Climate Change, Giannis Maniatis, and Rural Development, Georgios Karasmanis, that did not attend the ministerial meeting will also take part in the Greco-Turkish Supreme Council.
Despite the fact that the Council’s main target will be the relief of the tension between the two countries, due to the ongoing challenges of the research vessel “Barbaros” within Cyprus’ Exclusive Economic Zone (EEZ), a secondary objective will be the review of the two countries’ past agreements and protocols, that have been signed in similar Councils held in Athens, in May 2010, and Istanbul, in March last year. According to sources close to Davutoglu’s administration, the Turkish side does not intent to step back regarding the Cypriot EEZ issue and its seismic vessel “Barbaros,” escorted by battleships, will continue its scheduled research.
Press leaks from the Greek side argue that the Greek Prime Minister himself will be the one addressing the issue to Davutoglu, while the ten Ministers’ meetings with their counterparts will have a figurative character, focusing on issues regarding their jurisdictions.
Furthermore, the immigration issue, which is of great concern to the Greek government because of the increasing numbers of refugees crossing its land or naval borders due to the continuing civil war in Syria and the clashes in Iraq, cooperation on intelligence issues, the tourism sector, financial issues, the shipping and food industry will also be tabled in December’s Council.