GRNews
GreekReporter.comGreeceTurkish PM Davutoglu to Meet With Greek PM Samaras in Athens on... 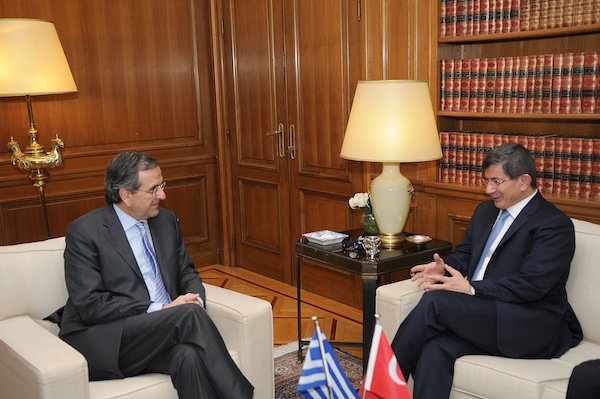 In a period when the bilateral relations of Greece and Turkey have reached their lowest point due to the Turkish actions in Block 3 of Cyprus’ Exclusive Economic Zone (EEZ), Turkish Prime Minister Ahmet Davutoglu will visit Athens on December 5 and 6 in order to hold talks with his Greek counterpart Antonis Samaras, it was announced earlier today.

“On December 5 and 6, 2014, the 3rd annual Greek-Turkish High-Level Cooperation Council will convene in Athens between the governments of Greece and Turkey, under the chairmanship of Prime Ministers Antonis Samaras and Ahmet Davutoglu,” the Greek Foreign Ministry announced.

Greek Foreign Minister and number 2 in the cabinet Evangelos Venizelos informed President of the Hellenic Republic Karolos Papoulias regarding the pact’s content, underlining that it is part of systematic efforts made by the Greek side to demarcate its maritime borders. “The major gain from the tripartite conference is the invitation that we have issued to all the countries in the region to accept the United Nations Convention on the Law of the Sea and to operate within its framework,” Venizelos said. Turkey has not signed up the treaty while Athens, Nicosia and Cairo have called Ankara to stop harassing Cyprus’ sovereignty by its ongoing seismic research for hydrocarbons in the island’s EEZ.

The announcement of Turkish PM’s visit to Athens comes only 48 hours after Greece, Cyprus and Egypt signed a tripartite agreement in Cairo, defining the ways the three countries will cooperate in the future on a range of issues, including the energy field. The Cairo Declaration was received with a sense of distrust by the Turkish side, with its leading newspapers characterizing it as a “trilateral front against Turkey.”

Cypriot Foreign Affairs Minister Ioannis Kasoulides declared earlier that his country “will continue its energy program as planned. Natural gas should be a motive for Turkey to change its stance,” while underlining that the recent trilateral summit between Greece, Cyprus and Egypt “does not turn against Turkey.”