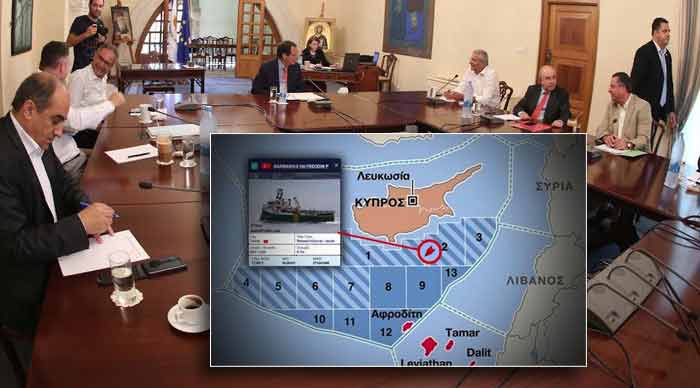 Cyprus may proceed to block Turkey’s European Union talks after its Exclusive Economic Zone (EEZ) was violated by a Turkish seismic vessel earlier this week. The decision was put forth yesterday among party leaders invited to a National Council by President Nicos Anastasiades.

“We cannot consent to the opening of any new chapters under the current circumstances,” Cypriot government spokesman Nicos Christodoulides told journalists on Tuesday. The Cypriot National Council is made up of parliamentary leaders. Its role is to advise the President on matters of national security. Mr. Christodoulides underlined that all participants agreed to promote a total of eight measures in response to Ankara’s provocations. Among these measures is the filing of a formal complaint against Turkey at this week’s EU leaders’ meeting.

The Turkish vessel “Barbaros,” escorted by one battleship of the Turkish Navy and two supporting cruisers, entered Block 3 of the Cypriot EEZ on Monday morning. The so-called Navigational Telex (NAVTEX) note issued by Ankara earlier this month preceded Nicosia’s suspension of United Nations peace negotiations until a solution to the island’s division had been reached. According to the NAVTEX statement, the “Barbaros” is scheduled to carry out seismic surveys for natural gas resources until the end of December.