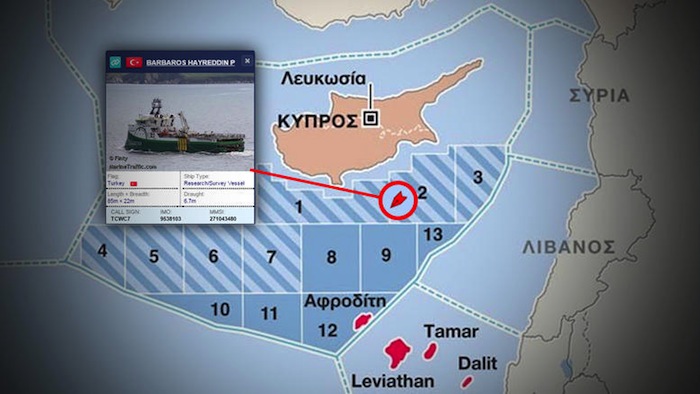 Nicosia does not intend to leave Ankara’s provocations in the island’s Exclusive Economic Zone (EEZ) without an answer. This was the message sent to the Turkish government after today’s second-in-a-row National Council of Cyprus.

According to state officials, the measures will take any political, diplomatic and legal form, while some of them will not be announced in advance. In yesterday’s meeting, the Cypriot National Council exchanged views on the steps to be taken and freely expressed their views and suggestions on how the government should react in order for its actions to be effective and avoid entering “dangerous waters” with unpredictable results for both sides.

It is reminded that Turkish seismic exploration vessel “Barbaros” entered the Cypriot EEZ yesterday. The move comes a few days after Turkey issued a maritime order, or NAVTEX, for the area. Ankara’s provocative actions prompted Cypriot President Nicos Anastasiades to suspend his participation in the United Nations-backed negotiations that aim to reunify the island under one federal state. Democratic Alarm (Dimokratikos Sinagermos) spokesman Prodromos Prodromou described the latest Turkish action as worse than the Imia Crisis in 1996. “Imagine what would such a move mean, if Cyprus, or any other nation, had sent naval forces in the area. There would be a clash,” he said.

Earlier this month, Anastasiades called on UN Secretary Ban Ki-moon to intervene in order to convince the Turkish side not to proceed with its scheduled seismic survey or any other interference and violation of the sovereign rights of Cyprus in its EEZ, as such a move would strike a heavy blow against the negotiations for the settlement of the Cyprus problem. In a letter to the UN chief, dated October 6, Anastasiades said recent developments “are not compatible with the smooth continuation of the talks on the Cyprus problem and have the potential to destroy the efforts of creating a good and positive environment and to actually derail the whole negotiating process.”

“It is regrettable that these developments come at a time when your new Special Adviser in Cyprus is trying to set the necessary conditions and framework for the resumption of the talks and for substantial negotiations,” the Cypriot President underlined, referring to “the latest decision by the Turkish Government to illegally interfere in the EEZ of the Republic of Cyprus.”