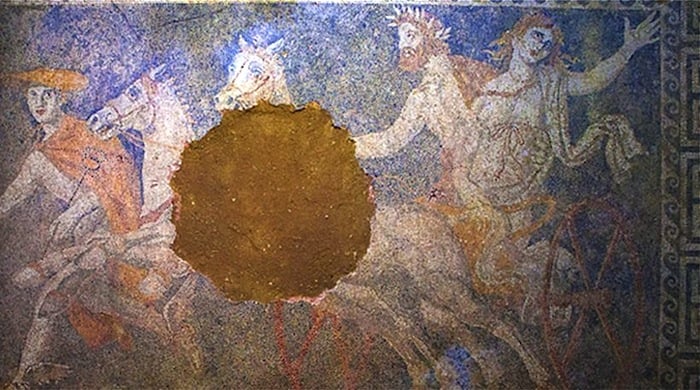 The Greek ministry of culture released today a set of pictures of the newly-excavated Amphipolis tomb mosaic. The mosaic is now fully uncovered, exposing a figure of a woman whom archaeologists have identified as Persephone. 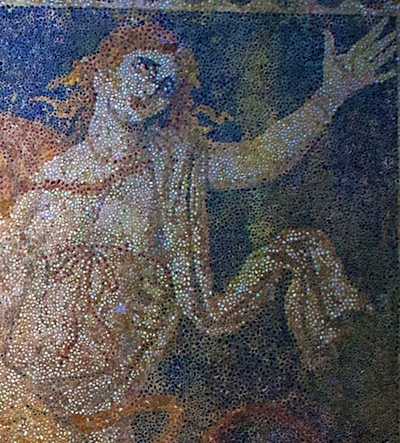 In a series of impressive pictures released by the ministry, the female figure is shown with fiery red hair, cloaked in a white robe fastened together with a red ribbon. She raises her left hand and wears a bracelet. Archaeologists are now certain that the mosaic, 4.5 by 3 meters, depicts the abduction of Persephone by Pluto.
That would make the bearded man crowned with the laurel Pluto, not the person buried in the tomb. The third figure is Hermes, who guides the chariot to the Underworld. The abduction of Persephone by Pluto is a common theme in artwork of the Hellenistic period. A similar depiction appears in a mural in the nearby Aiges royal tomb.
In the press release that accompanies the pictures, the culture ministry describes the mosaic as stunning, superbly rich in color and artistic detail, that aspects of it appear three dimensional, the figure of Hermes in particular. Protection work has already begun: Layers of styrofoam have been placed over the mosaic. On top of that layer now rests a slab of wood. Forty centimeters above the protective layering, technicians will install a temporary wooden floor so that workers and archaeologists can walk over the mosaic and have access to the next chamber.