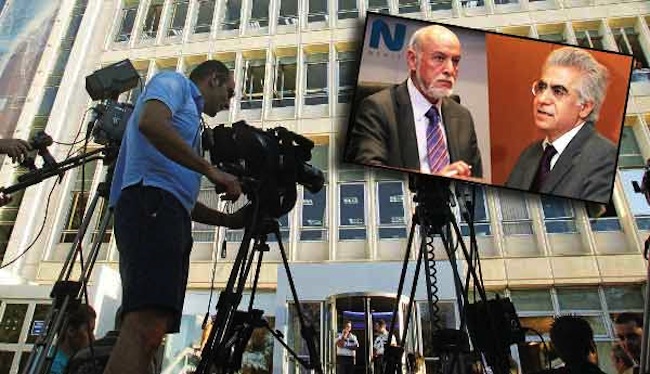 The resignation of public employees in Greece is as common as a hailstorm in July, but it seems that those working for NERIT — the New Hellenic Radio, Internet, Television — are the exception, after the sudden resignation of Chairman Antonis Makridimitris and Deputy CEO Rodolfos Moronis. Both members of the New Democracy party.
The public television administration did not cite the reasons for the resignations, but everyone knows, or at least suspects. Moronis wrote in his Twitter account “If you announce that you want to make something independent, objective and qualitative but you don’t mean it, then don’t assign it to someone who means it.” The key word here is “independent,” something that NERIT news coverage only pretends to be most of the time.
The two men often complained, off the record, that government higher-ups interfered with their work, asking for favors or trying to dictate news coverage on occasion. They also had frequent disagreements with government spokesperson Sofia Voultepsi.
It seems though that the straw that broke the camel’s back was the coverage of Alexis Tsipras’ speech on Saturday and a press conference on Sunday at the Thessaloniki International Fair. The SYRIZA leader wanted both appearances to be covered live while NERIT argued that they should cover only one, since Prime Minister Antonis Samaras and Vice-President Evangelos Venizelos had only one press conference each. SYRIZA spokesman Panos Skourletis talked about “crude intervention” while Tsipras didn’t miss the opportunity to talk about censorship.
In reply, Voultepsi accused the opposition leader of complaining that he doesn’t get twice as much coverage as other political leaders from a TV channel he claims he doesn’t recognize and boycotts.
SYRIZA never considered NERIT as public television. In fact, Tsipras and SYRIZA MPs do not recognize NERIT. They did so since its inception last May, after the abrupt shutdown of Greek Broadcasting Service (ERT) in June 2013. SYRIZA and other opposition parties called the closing of ERT “unconstitutional.” SYRIZA MPs boycotted NERIT and never appeared on public television.
In the past, ERT was accused by opposition parties that it follows the government line. Such accusations are inevitable in the war between political parties. It is usually the governing party that appoints public television executive members. It is also inevitable that news will have the tint of the governing party politics. Today, NERIT gives extensive coverage to news that favor the coalition government of New Democracy and PASOK. Tomorrow, it will do the same for the next governing party.
“Objectivity” and “independence” are two words that don’t sit comfortably in the same sentence with the words “Greek press.” TV stations will follow the government line if the government does favors to its owners. Private TV stations in Greece get huge bank loans with the state’s help so their news will favor the government. Especially when they see their debts erased.
Newspapers, on the other hand, take sides. Openly, and in some cases, fanatically so. They are roughly divided to newspapers of the “left” and newspapers of the “right.” Today, half of them support the coalition government and the other half support SYRIZA. Their screaming headlines confirm that their content is nothing more than cheap propaganda.