GRNews
GreekReporter.comGreek NewsArchaeologyTwo Scenarios for the Great Tomb in Amphipolis

Two Scenarios for the Great Tomb in Amphipolis 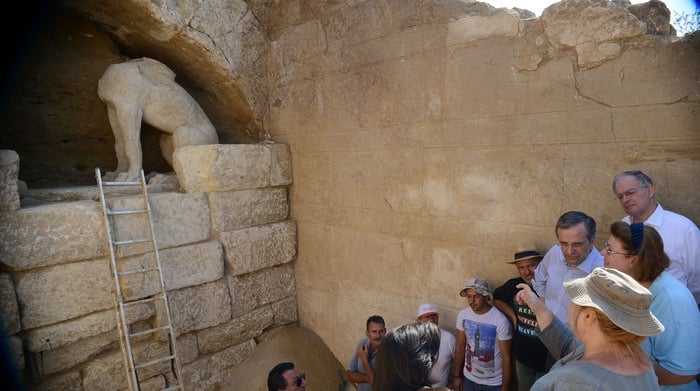 Greek Prime Minister Antonis Samaras, accompanied by his wife Georgia and Culture Minister Konstantinos Tasoulas, visited the excavation site of Ancient Amphipolis, in Serres, northern Greece on Tuesday morning.
Samaras visited the Casta tomb and was guided through the excavation site by the archaeologist in charge Katerina Peristeri who briefed him on the discoveries.
Archaeologists are very cautious in making assessments on who was buried in the tomb. However, it is believed that the tomb was built by famous architect Denocrates, who was a very close friend of Alexander the Great.
There are two possible scenarios on who was buried in the tomb:
The first is that the tomb belongs to the wife of Alexander the Great, Roxanne, and his son, Alexander the 4th. According to archaeologists, the date of the surrounding peribolos coincides with the period during which great historical events took place in the area of Amphipolis. Alexander the 4th (323-311 BC) was heir to the throne of Macedonia as he would be the king after his father’s death. However, he was arrested and kept prisoner in Amphipolis under General Kassandros’ orders. He was later murdered at the age of 12 along with his mother.
The second scenario is that the tomb belongs to an important military figure of the time. Archaeologists base this scenario on the fact that many generals and admirals of Alexander’s army lived in the area of Amphipolis, and some of them were killed on site.
“It is clear that we stand before an extremely important discovery,” Samaras said, adding that the land of Macedonia continues to reveal unique treasures that “weave the unique mosaic of our Greek history that all Greeks are proud of.”
“This is a monument with unique features: A surrounding peribolos of 497 meters, almost a perfect circle carved in Thassos marble. The Lion of Amphipolis is 5.20 meters high; let’s imagine it as being on the top of the tomb,” said the Prime Minister while also referring to the wide path that leads to the tomb entrance and the two Sphinxes that appear to be guarding it.
“I believe all these discoveries have allowed archaeologist Katerina Peristeri to be optimistic that this is a unique burial monument, which -–as she said — dates between 325 and 300 BC. Regarding the key question, the excavation will reveal the identity of the deceased. The excavation will continue at a pace dictated by the discoveries as well as scientific ethics,” he added congratulating Peristeri and her colleagues.
Archaeologists, who began excavating the site in 2012, hope to fully explore the tomb by the end of the month to determine exactly who was buried there.
Situated about 100 kilometres north-east of Greece ’s second-biggest city, Thessaloniki, the tomb appears to be the largest ever discovered in Greece, and probably belonged to “a prominent Macedonian of that era,” a Culture Ministry official said.
The tomb, which consists of decorative white marble and frescoed walls, was partially destroyed during the Roman occupation of Greece.
Amphipolis was founded in 437 BC as an Athenian colony but was conquered by Philip II of Macedon, Alexander’s father, in 357 BC.