The Mystery of Ancient Amphipolis 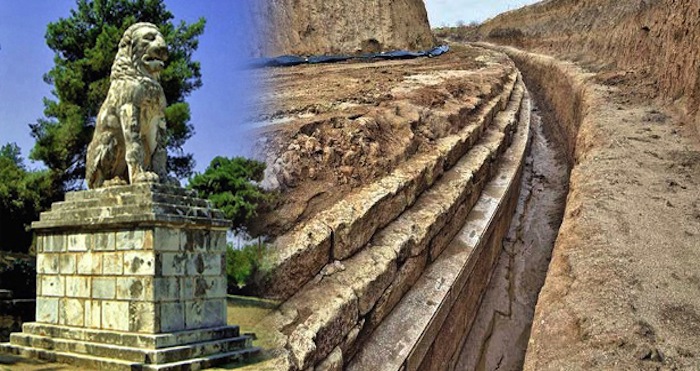 Excavations conducted in a tomb in Casta, in ancient Amphipolis, have raised questions. The area is being guarded by the police while the Greek Ministry of Culture and Sports is monitoring ongoing developments.
Archaeologists are wondering if they have discovered an ancient royal tomb. According to data presented by the department head of ancient monuments in northern Greece, Catherine Peristeri, excavations in Casta mound have revealed a unique world monument due to its size reaching a height of 3 meters and a total length of 497 meters.
The tomb dates back to 325-300 BC and reportedly bears the signature of famous ancient architect Dinocrates, a close friend of Alexander the Great.
According to Peristeri, major historical events had taken place in the area of Amphiboles during that period. Major generals and admirals of Alexander the Great are associated with the area,  and it is there that in 311 BC Cassander exiled and then killed the wife of Alexander the Great, Roxanne, and his son, Alexander the Fourth.
The tomb consists of foundations, supporting columns, a top part and decorations of white marble from Thassos.  It was destroyed during the Roman period and many architectural elements disappeared, some of which were discovered during excavations in the area where the famous Lion of Amphipolis is located.
Excavations in the mound of Amphipolis first started in the 1960s. Many have claimed that the tomb belongs to Alexander the Great. However, archaeologists and experts say that although the monument is really important, it is not attributed to him.
Samaras visits ancient Amphipolis
Greek Prime Minister Antonis Samaras, accompanied by his wife Georgia and Culture Minister Constantinos Tassoulas, is visiting the site of Ancient Amphipolis, in northern Greece. Samaras will also visit Kasta hill and will be guided through the ongoing archaeological excavation site.