Most visitors will say that the Greek island of Mykonos is the ultimate party destination. Although this statement holds a lot of truth, there is way more to do and enjoy on the famous Aegean island than just party.
Despite its nightlife attractions, Mykonos does not offer only nocturnal pleasures and adventures. The lovely beaches, great restaurants and luxurious hotels exist to please the most demanding guests. So let’s explore the other side of the island, beyond parting.
Mykonos, mainly Chora which is the island’s central town, started changing around the 70’s due to the great number of tourists. The island’s nightlife is one of the most well-known characteristics of Mykonos,  since the entertainment establishments in town and along the coast stay open until sunrise. And with clubs like “Space” and “Cavo Paradiso” it is no wonder that Mykonos’ party scene has captured global attention.

In the morning the town is almost empty, since the clubbers are busy nursing their hangover. This is the time that ‘Chora’ returns to its native inhabitants; the widows in black tending to their potted geraniums and bougainvilleas, and the elderly men looking after the tiny Byzantine chapels scattered through the town.

Chora, the island’s main town, is a series of twisting streets, built to disorientate the pirates, or as others believe, to keep away the lethal winds that come whipping in from the Aegean sea. Two different types of people – the pleasure seekers and the locals – coexist in harmony by working different shifts. For those wishing to explore, one can find places untouched by the tourist invasion.

Wandering away from Chora’s main promenade there are local fish taverns that not only offer fresh fish -cooked on the spot and in excellent prices – but also some peace and tranquillity alongside the ouzo and meze. On the other hand, for those seeking something with more glamor and luxury, there are plenty of restaurants and bars on the seafront, appealing to all tastes.

Lovers of sightseeing and wandering should not forget to visit Little Venice, the island’s most graphic and beautiful spot. Built around the 18th century, Little Venice was the neighborhood of the rich merchants and sea-captains. Its architectural design with the colorful buildings on the seashore resembles the famous Italian town.

Built in the early 1900’s southeast of the Chora are the windmills, another beautiful landmark of the island. The first windmills of Mykonos were a major asset to the island’s economy from the 17th to the 19th century. However, after World War I, the technological development halted the use of the windmills and they have since remained a well-known landmark in Greece and abroad. 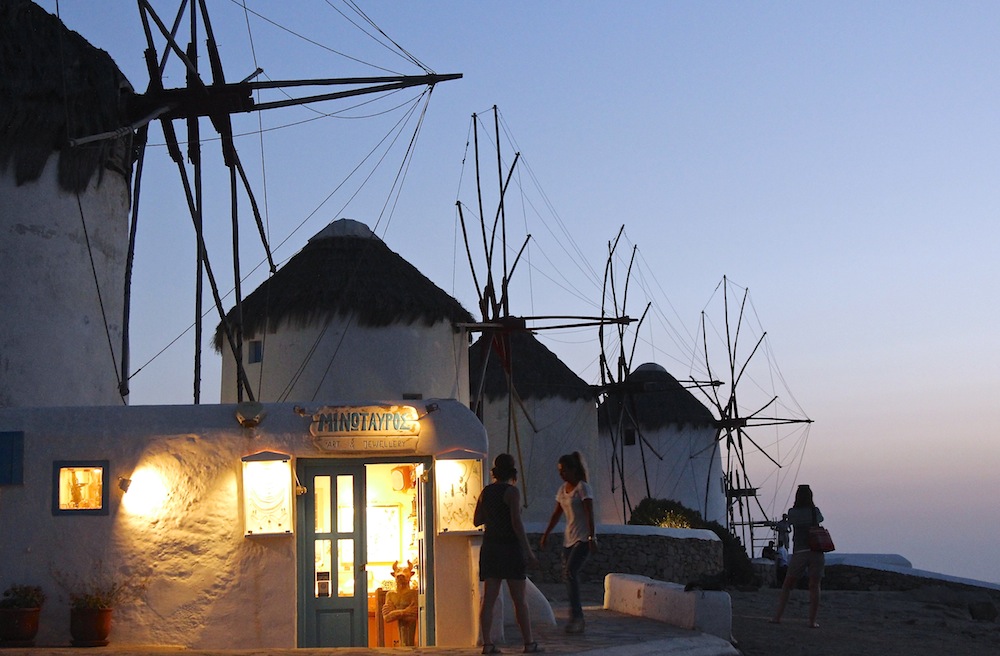 A very famous and frequently photographed subject of the island is, of course, the pelican of Mykonos. The first pelican to arrive in the island was “Petros”, found in a storm in 1954 and finally gave up migrating to become a local resident of Chora. After more than thirty years on the island, the pelican eventually passed away in 1986 and his loss was felt from Myconians and tourists alike who hailed “Petros” as a local celebrity. However his loss established a tradition, since many pelicans have been given to the island as a gift from people like Jackie Kennedy and foreign institutions such as the National Zoo of Hamburg. Now the island has three feathered residents proving that the spirit of “Petros” lives on.

Finally, a great attraction is the monastery of Panagia Tourliani, the religious heart of Mykonos which is located in the centre of the island, in the town of Ano Mera. The walls of this delicate, 18th-century-domed, church are filled with religious representations. Its classical tower was built in the late 30’s by marble-cutters from the neighboring island of Tinos.

Even though Mykonos has more than enough to offer for the hungry eye, it would be unforgivable not to visit Delos – a 20 minute boat ride from Mykonos harbor ($24 return ticket). The tiny island of Delos was the most sacred island in ancient Greece and the birthplace of Apollo and Artemis. Today, its only inhabitants are the dragon lizards that were brought from Africa by the ancient Greeks to honor Apollo’s divine title of the “Lizard slayer”. The island’s ruins are dated to the Roman period ( 7th century BC) when the greatest treasures of Delos –five crouching, roaring stone lions– were carved.

Back at Mykonos, it is worth exploring the island’s beautiful beaches by renting a car or a scooter from any of the countless rental shops. The beaches in the south – protected by the northern winds – tend to be more crowded. Those wishing to watch the beautiful people pass by and have a swim without worrying about losing their sun hat or getting sand all over their clothes, should visit beaches like “Psarou” and “Agios Stefanos”, famous for their beautiful crystal waters and party-like attitude. However, loners would love the beaches on the island’s northern side. Visitors of crescent-shaped Ftelia beach and Agios Sostis can enjoy a less crowded swim. 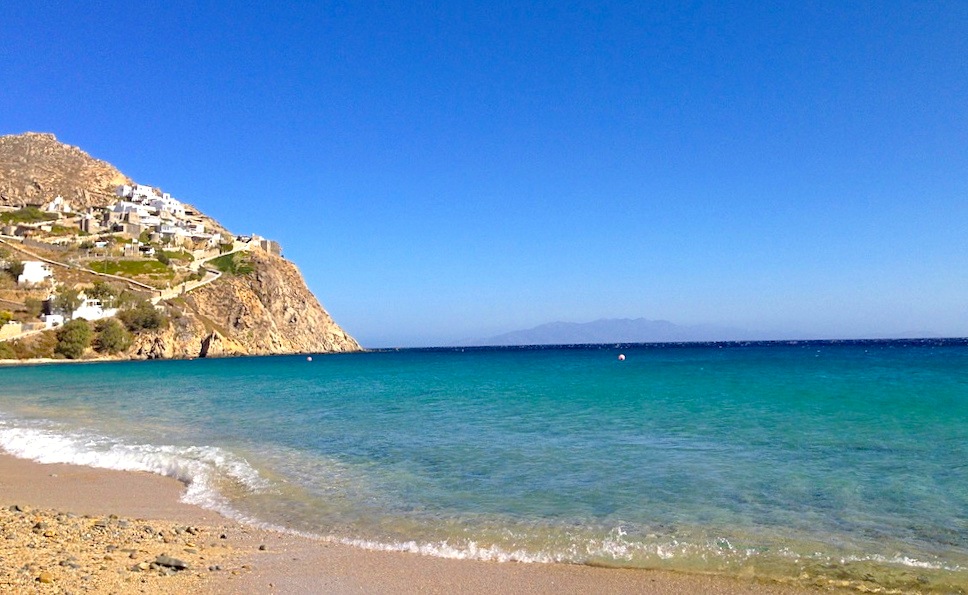 At the end of the day, Mykonos is fit to please all tastes. Whether you like to stay up all night and party, or, like to enjoy some peaceful holidays filled with sun and sea, you will not be disappointed. The warm hospitality of the locals, the beautiful white houses and the blue color of the sea will leave you care-free and content… and don’t forget to watch as many beautiful sunsets as you can while on this heavenly island.

We stayed at Boheme Mykonos, the newest addition to the high-end hospitality of the island. Just a stone’s throw from the unique Mykonian Windmills and the popular Little Venice, Bohème is built according to the traditional Cycladic architecture standards, with luxurious suites, some of them with outdoor Jacuzzi and Bohemian facilities. Find out more about this great hotel at www.bohememykonos.com.
How to get there:
You can reach Mykonos by plane from Athens through plenty daily flights, or, use the high speed boat from Peiraeus and Rafina – conventional (slower) boat connection is also available. From the three options, we chose the high-speed boat, an easy way to take your car with you and (considering the check-in at the airport) it ends up being almost the same time to get to Mykonos. View boat schedules here.