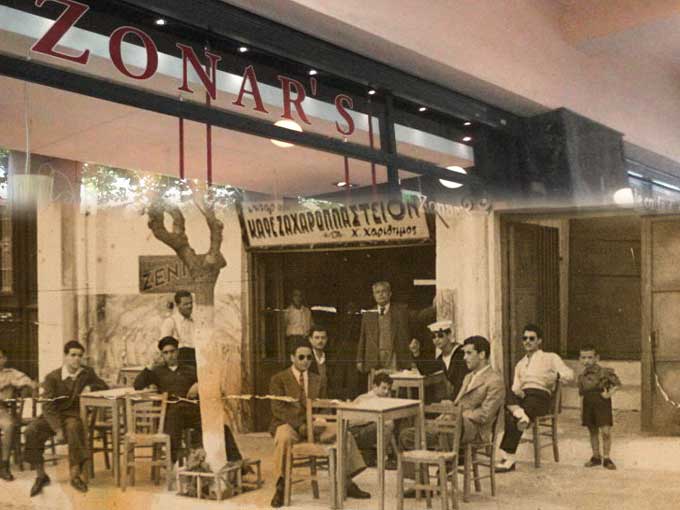 Almost all historic cafés in Athens are now sadly gone. These places were more than just mere cafés; they were meeting places for artists, politicians and authors for several years. The majority of these buildings are now demolished. The customers who once frequented these cafes however, live through the artists and writers whose works were created in these establishments and go hand in hand with Greek culture. The following places are worth mentioning:
Black Cat Café is located at the crossroad of Aslkipios and Acadimias streets and stands next to famous Greek poet’s, Kostis Palamas, house. New publications and plenty of political events began here and the café attracted police  attention when the political organization “Socialistic Part of Athens” started meeting up there. Its regular customer list includes the Greek poets Lambros Porfyras, Kostas Varnalis,Napoleon Lapathiotis and Telos Agras.
Another historical establishment is the Loumidis attic Café on Stadiou Street. Its tables shaped a pi and the left side was reserved for actors and journalists while authors used to gather in the back. Famous Greek poets and composers such as Odysseas Elytis, Manos Hatzidakis, Miltos Saxtouris, Mihalis Katsaros and Mikis Theodorakis often visited the place.
Right across the street was Rosikon Café, once very busy, but now remains closed, waiting for a new tenant.
From the beginning of the century, Panepistimiou street was filled with numerous cafés, restaurants and patisseries like Panellinion, Inomena Voustasia and Ideal.
On the way to Syntagma square, one will certainly notice Zonar’s Café, one of the most luxurious cafés in Athens. Changing location from Kriezotou Street, it is now housed at the Military Pension Fund building and is run by Karolos Zonaras, a Greek from the Greek-American diaspora. The café was famous for its candies and Greek politicians Evangelos Averoff, Georgios Rallis as well as the journalist Freddie Germanos were frequently seen there.
Patisserie Floka used to lie next to “Zonar’s.” It was a family business, run by two brothers from Thessaloniki, and opened its doors for the first time in 1940. Odysseas Elytis and Nikos Gatsos always had a table in the attic reserved especially for them. Giorgos Seferis, the then Prime Minister and his wife were also regular customers at Floka. A shopping mall is now built where Floka once was.
Few steps from Floka was the Brazilian Café, famous for its high-quality coffee where espresso was introduced to all coffee fans of Athens. Its literary atmosphere inspired Kostas Tahtsis to write a poem, entitled “Brazilian Symphony,” which was later illustrated by Giannis Tsarouhis.
Great artists and politicians also used to visit Apotsou Café-ouzerie and Café Zharatou. Rumors have it, that Andreas Papandreou used to praise the latter, saying that freedom rules there better than it does in the Greek Parliament. Café Zaharatou changed location in 1880, in the opposite corner from its original location, later to be demolished in 1960.
All the above mentioned traditional cafés began to lose their glory shortly after 1955, which was the time when new cafés, like Byzantion Café and Deksamenis Café, popped up. They were famous for the poems written in them or even about them by famous Athenian poets. Today, a statue of Odysseas Elytis is placed in the same area with his favorite café at Deksamenis square.