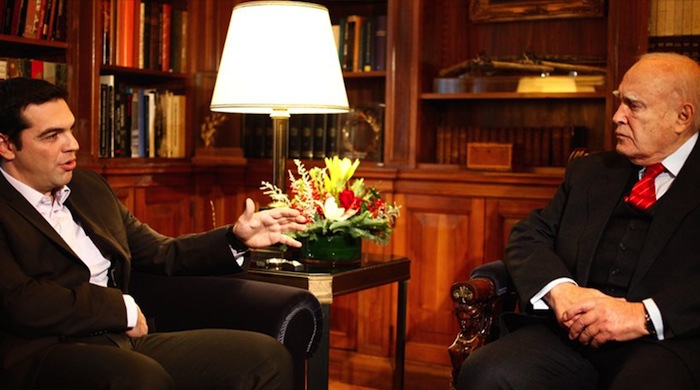 Major opposition Coalition of the Radical Left (SYRIZA) leader Alexis Tsipras met with Greek President Karolos Papoulias on May 26, a day after his party won the European Parliament elections and said there should now be early national elections.
SYRIZA beat the ruling New Democracy conservatives of Prime Minister Antonis Samaras by 3.9 percent, which the Premier said was insignificant and didn’t warrant calling snap polls before the coalition government, that includes the PASOK Socialists, finishes its term in 2016.
With almost all the votes counted, SYRIZA had 26.6 percent of the vote, against 22.7 percent for New Democracy. PASOK was tied to the new center-left alliance Elia, or Olive Tree, which gained eight percent. The socialists had been polling as low as three percent before jumping on the Elia band wagon.
Tsipras said that he told Papoulias if the results were translated to parliamentary elections the coalition would have 94 MPs rather than the 152 it has today, a bare two-vote majority in the 300-member Parliament.
“This means there is a major disharmony between the public will and the representation in Parliament,” said Tsipras, adding that New Democracy and PASOK had seen their combined share of the vote fall by 11 percentage points since the June 2012 national elections.
“We should go to national elections as soon as possible, in an organized and calm manner to restore democratic normality,” said Tsipras.
The government countered that between them, New Democracy and PASOK, even as part of  Elia, still had a bigger percent of the votes than did SYRIZA.
Tsipras said the EU ballot was a referendum on the harsh austerity measures the government imposed on the orders of international lenders but Samaras dismissed the argument.
The SYRIZA leader said Samaras and his government “does not have a mandate to take a decision that commit the Greek people for years to come,” referring to upcoming debt relief negotiations with the Troika of the European Union-International Monetary Fund-European Central Bank (EU-IMF-ECB).
Tsipras said he was “warning” Samaras that he should not adopt any more austerity measures, privatize public water companies and appoint a new Bank of Greece Governor or the country’s next European Commissioner without SYRIZA’s approval after the Leftists won only six seats in Brussels compared to five for New Democracy.
PASOK leader Evangelos Venizelos labelled “unconstitutional” Tsipras’ request for early general elections at a news conference shortly after Tsipras met with President Karolos Papoulias.
The PASOK leader said Tsipras’ suggestion that the European election results indicated a “disharmony” between the public will and the allocation of seats in Greek Parliament was based on an old version of the country’s constitution.
Government spokesman Simos Kedikoglou insisted that the result of the EU ballot could not be interpreted as a vote against the coalition. “If this were the case then governments would not have four-year terms in any country,” he said.
“Our responsibility before the constitution and the people is to fulfil this government’s mandate, and someone should tell Mr Tsipras that the article of the constitution he referred to was scrapped 28 years ago. By making reference to it, he shows how much he lacks seriousness,” added Kedikoglou.
The neo-Nazi Golden Dawn party, some of whose leaders have been arrested or jailed pending trial on charges of running a criminal gang, will have three seats in the EP, while Elia, the KKE Communists and the new To Potami (The River) movement two each and the Independent Greeks one.