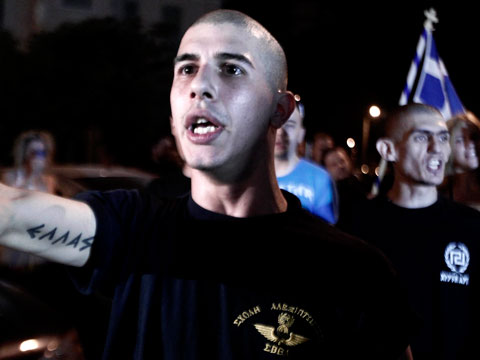 Its leaders are locked up or arrested, its message discredited by human rights organizations, the government trying to dismantle it, but the neo-Nazi Golden Dawn party still took third in European Parliament elections and won three seats in Greece’s representation in Brussels.
While the party’s showing was generally downplayed in Greece after it won 9.3 percent of the vote – up from 6.97 percent it won in the 2012 national elections when it gained 18 seats in the Greek Parliament – the extremists officials were clearly gloating after the results showed they weren’t dead yet.
“Golden Dawn is the third political power in Greece, it’s the only party that shows such a steep rise,” said Ilias Kasidiaris, the Golden Dawn spokesman, who, along with the rest of its hierarchy is facing charges of running a criminal gang.
The party denies it has neo-Nazi leanings, although Kasidiaris has a swastiko tatoo, Hitler’s Mein Kamp has been in its playbook, and prosecutors said they’ve uncovered evidence party leaders were following Nazi metholodogy in organizing itself.
Speaking next to the party flag – the ancient Greek meander which resembles the symbol of the Third Reich – he delivered a message from Nikos Michaloliakos, the party leader and a member of Greek Parliament who is currently in jail pending trial.
“I congratulate you for managing to resist the government’s terrorism and for not believing their lies,” the message read, according to the British newspaper The Guardian.
“We are the only political power that actually stands up against our state being run by foreign powers. New Democracy paid the price for their policies against our people and their lies and SYRIZA has failed to express the public anger,” it said in reference to the ruling Conservatives and the major opposition Leftists who won the battle for Brussels.
“Golden Dawn is now the third pole in the political life of the country. Our slogan was the thieves should be in prison and the money they embezzled returned to the people but the thieves managed to put us in jail. They tried to dig a grave for us but they fell in it themselves,” the message added.
Defiant still, Michaoliakos repeated party demands that Greece end bailout deals with the Troika of the European Union-International Monetary Fund-European Central Bank (EU-IMF-ECB) that put up 240 billion euros ($327 billion) but forced the government to instill harsh austerity in return.
The anti-bailout stance, along with jingoism and railing against (and even, critics said, attacking) immigrants made Golden Dawn resonate with people disenfranchised with mainstream parties and angry over big pay cuts, tax hikes, slashed pensions and worker firings.
Golden Dawn tried to soften its image before the election and rose at the same time as other nationalist parties, including the National Front, which won big in France.
Analysts maintain insist that the majority of their voters chose the party as a “protest vote” and not because they endorsed their “fascist ideology” and Prime Minister Antonis Samaras said he wanted to woo its voters, who he too said were not Nazis but disgruntled.
Golden Dawn slid in popularity last year after one of its members was arrested in the murder of an anti-fascist hip-hop artist and had fallen behind the new populist To Potami (The River) movement in pre-election surveys but rebounded once again, like the Phoenix of the Greek military junta that ruled from 1967-74 and which it reveres.