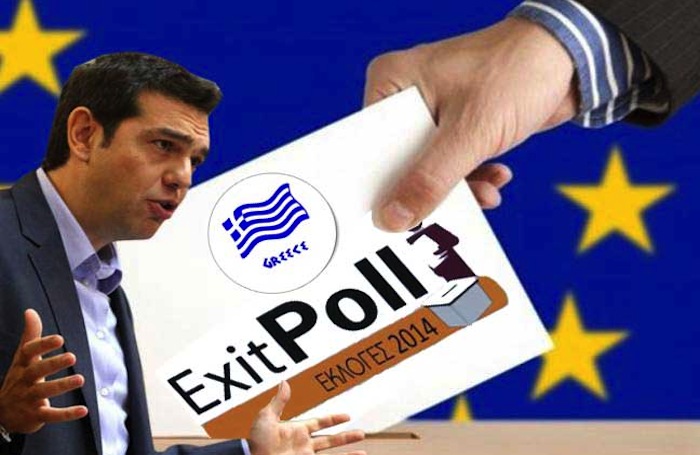 Initial results from exit polls on May 25 showed that Greeks gave the major opposition Coalition of the Radical Left (SYRIZA) a margin of up to 3 percent in European Parliament elections, but likely not the knockout blow needed to force early elections.
The first results – which in the first round of local elections on May 18 were wrong – gave SYRIZA the edge over the ruling New Democracy Conservatives of Greece ‘s Prime Minister Antonis Samaras and his coalition partner the PASOK Socialists in the Battle for Brussels.
It the results hold up it would be an historic moment in Greece with a far-left party triumphing, albeit in a contest to send the country’s representatives, with the allocation based on the findings of the parties.
SYRIZA leader Alexis Tsipras had been hoping for a margin big enough to bring down the government he blames for imposing harsh austerity measures on the orders of international lenders, including the ouster of embattled PASOK leader Evangelos Venizelos.
Until PASOK from 2010-11, and an interim government, followed by coalition in June of 2012 began hitting Greeks with austerity the governments said were necessary to save the country from itself, SYRIZA had been a marginal party. Its opposition to the devastating measures saw it rise quickly.
The PASOK chief had tied himself to the new center-left political movement Elia, or Olive Tree, which showed third in one exit poll but fourth behind the neo-Nazi Golden Dawn in another.
SYRIZA was polling from 26-30 percent, with New Democracy ranging from 23-26 percent in one poll and 23-27 percent in another. In one exit poll, Golden Dawn – whose leaders have been jailed or arrested on charges of running a criminal gang – had from 8-10 percent in a surprise, with Elia 7-9 percent.
The new populist, anti-politician To Potami movement that had been as high as third in pre-election polls was showing a disappointing 5-7 percent, tied with the KKE Communists. Then came the Independent Greeks at 3-4 percent.
The polls coincided with the second round run-off of local elections, with both races contentious and Samaras warning that SYRIZA would plunge the country back into chaos just as he said he had put it on the road to recovery and brought political stability.
But he couldn’t convince enough Greeks that the big pay cuts, tax hikes, slashed pensions and worker firings he implemented on demand of the Troika of the European Union-International Monetary Fund-European Central Bank (EU-IMF-ECB) in return  for 240 billion euros ($330.7 billion) in two bailouts was the only way out of a crisis.
That had been caused largely by the ruling parties taking turns for four decades with wild overspending and runaway patronage that bankrupted the country.
Samaras had argued the EU polls shouldn’t be a referendum on his government, especially since he said Greece had reached a primary surplus of 1.5 billion euros and last month floated a 3-billion-euro bond, the first since a previous PASOK government in 2010 first reached out for a bailout with the economy on the precipice of disaster.