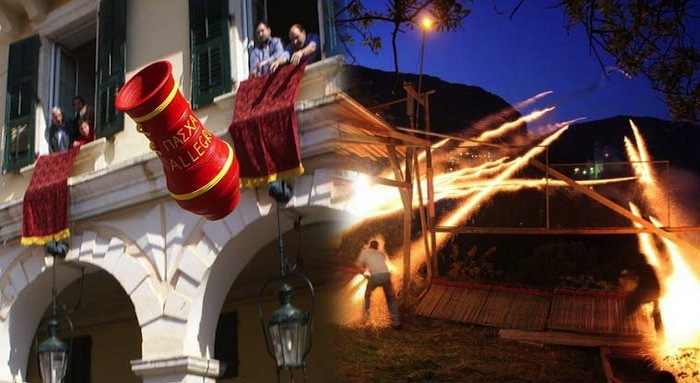 Greece is a country with rich tradition and the Greeks always make sure to honor those traditions, especially during religious celebrations. The following traditions are a glimpse into some of the original ways in which Greeks celebrate Easter…..
The Rocket War of Chios: On the Greek island of Chios the locals have a tradition to spice things up for Easter. Besides the traditional egg cracking and conventional fireworks, a rocket war takes place between two local churches during the divine liturgy of Holy Saturday night. “Rouketopolemos”(literally Rocket-War) is the name of the traditional event held annually at Easter in the town of Vrontados on the Greek island of Chios.
Two opposing parishes of the town spend the evening just before Orthodox Easter Sunday firing tens of thousands of homemade rockets at each other’s church — while the more pious among them attend mass inside. The two rival parishes are St. Mark’s and Panaghia Erythiani (“Red Madonna”), the respective churches built on two hilltops about 400 meters away from each other. The objective is to hit the bell tower of the church of the other side. The rockets are wooden sticks loaded with an explosive mixture containing gunpowder and launched from grooved platforms.
It is estimated that the yearly production of rockets produces some 70 thousand to 80 thousand small missiles.
On the island of Kythnos, on Easter Sunday a swing is set in the town square and all the kids, boys and girls take turns swinging while wearing traditional Greek clothing.
On the island of Syros, Easter is celebrated by the Orthodox as well as the Catholic community, and on Folegandros, the icon of the Assumption is taken from the church of St. George and then carried around town for three days. The icon procession passes through the homes of all religious people.
On the island of Patmos, on Holy Thursday a representation of the Last Supper and the Washing of the Feet takes place in the central square, while on Lazarus Saturday in Kalymnos, there is a tradition where the women bake man-shaped cookies, called “Lazarakia,” with a head, arms and legs.
On the island of Karpathos on Easter Sunday, instead of spit lamb, they make a traditional recipe, called Byzanti, which consist of lamb stuffed with rice, groats and offal. After the preparation the food is put in a traditional Carpathian oven sealed with mud and clay overnight. On Easter Sunday the oven is opened and everyone enjoys the food with some local wine.
On the island of Corfu, the morning of Holy Saturday after the First Resurrection that takes place in the Metropoli, the bells of all the churches ring and people start throwing thousands of clay pots (botides), filled with water and laurel from their windows. The botides crash on the road with a loud bang. The loud sound as well as the water and laurel are supposed to scare “evil” away.
At the Metropolitan Church of St. Nicholas in Zakynthos, the Epitaph procession takes place in the early hours of Holy Saturday. When the first bell rings, white doves are set free from the church and from the windows of many houses.
In Livadeia, a very well-known tradition takes place on Easter Sunday. After the Resurrection of Christ, before dawn, people in Livadeia prepare pits, light the fires with their resurrection candles and then roast the lamb over the fire.
In Monemvasia, Symi and Astypalaia, on Easter Sunday or the day after it is a custom to burn Judas. A dummy (Judas) stuffed with straw and wood which has first been carried around the village, is then set on fire.