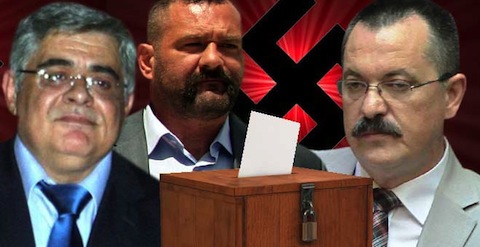 A second poll in a week has seen support for Greece’s neo-Nazi Golden Dawn party fall like a rock after its leaders were arrested on charges of running a criminal gang, but the extremists barely maintained their standing in third place among voters, not far ahead of the once-might PASOK Socialists.
As the party’s leaders await trial on charges of murder, money laundering and other accusations brought by the government after the murder of an anti-fascist hip-hop artist for which a man linked to Golden Dawn was arrested, a survey by ALCO for Sunday’s Proto Thema showed a drop in popularity from 10.8 to 7.2 percent. PASOK, a junior partner in the coalition government of Prime Minister Antonis Samaras, the New Democracy Conservative party leader, is nipping at its heels at 7 percent.
And more than two-thirds of Greeks,  68 percent, believe Golden Dawn is a criminal organization with 66 percent saying they feel the party is a threat to democracy, troubling news for the party which aspired to take over the country and throw out all foreigners and end a deal with international lenders putting up $325 billion in two bailouts that is all that is keeping the economy from collapsing.
Golden Dawn’s leaders offered no alternative other than opposing bankers, politicians, Capitalists, immigrants, gays, atheists and people who don’t believe as they. The party had risen on the back of it anti-immigrant, anti-bailout fervor but the killing of Pavlos Fyssas has rapidly sapped its strength, according to the two polls.
New Democracy maintained its standing in first place with 25.8 percent to 24.8 percent to the major opposition Coalition of the Radical Left (SYRIZA) which has been trading the lead with its rival for months based on its opposition to austerity measures being imposed by the government to keep rescue monies coming.
The other parties in the Parliament, the Independent Greeks, the KKE Communists, and the Democratic Left (DIMAR) are irrelevant, the polls show.