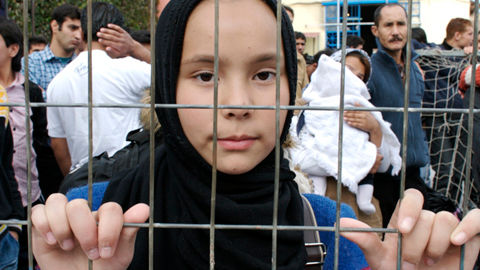 Viewed as a hostile place for immigrants as the neo-Nazi Golden Dawn party grew in popularity, Greece is working with outside organizations and NGOs in an attempt to manage an overwhelming crush of refugees.
Nearly 1.15 million immigrants are in Greece, just more than 10 percent of the nation’s population, according to the International Organisation for Migration.
Their numbers are swelling despite intensified patrols by the EU-funded Frontex and the Greek Coast Guard as well as a recently completed fence along the Turkish border.
The United Nations High Commissioner for Refugees (UNHCR) Athens’ office said Greece arrested 34,000 foreigners trying to sneak into the country last year and more than 7,300 in the first eight months of this year.
Immigrants often line up in the early morning hours in front of the overcrowded Council for Refugees to seek residency permits. They also queue at the Athens’ police headquarters to seek pink cards, which identify them as asylum-seekers with the right to remain in Greece, seek employment and receive minimal assistance.
“Organizations helping refugees and immigrants face serious financial problems and huge obstacles in their work,” Alex Sakellariou, a sociologist at Panteion University in Athens, told Southeast European Times. “They do the best they can within these harsh economic circumstances.”
The government-created Greek Action Plan on Asylum and Migration Management, a major reform effort backed by UNHCR, comes at a critical time as Greece faces an additional influx of refugees from Syria, while also cracking down on the neo-Nazi Golden Dawn party following a wave of violence against immigrants.
The government set up a new asylum service to replace what UNHCR said was a dysfunctional operation that granted protection to only one in 10,000 applicants.
There is also a series of First Reception Centres to assess new arrivals, particularly on border locations and key islands off Turkey.
Greece is going to be the entry point, especially for those coming by land or water from Syria,” Bill Frelick, Refugee Program Director for Human Rights Watch, told SETimes. “But whether Greece likes it or not there are legal responsibilities attached to a person being physically in your territory.”
Greek officials say they are coping as best as they can in lieu of criticism that detention centers are overcrowded and conditions so deplorable that some detainees have occasionally rioted.
Kevin Nama, 35, from Nigeria, said the Council for Refugees offered him as much help as it could, but the government has until now been slow to react to the immigrants’ plight.
They try to do what they can but there are so many people there, it is so crowded,” Nama told SETimes.>Greece has been criticized for the conditions in its detention centers and for last year’s intensive sweep for illegal immigrants.
UNHCR, Human Rights Watch and other international organizations said the Greek government has responded to the criticism, though not yet in full measure, to better handle asylum applicants.>
The government reviewed 1,921 applications for asylum from lands as distant as Iran and Iraq and neighboring countries like Albania in the June-September period.
Sabbir Milan, 22, from Bangladesh said he makes 4 to 5 euros a day by selling trinkets while he waits for help at the refugee center “They try to help, but really, what can they do? It is the government that has to give us rights,” Milan told SETimes.
(Used by permission of Southeast European Times, www.setimes.com)

The first-ever written exam for Greek citizenship is scheduled for May 16, 2021, according to an announcement from the Interior Ministry.
Food