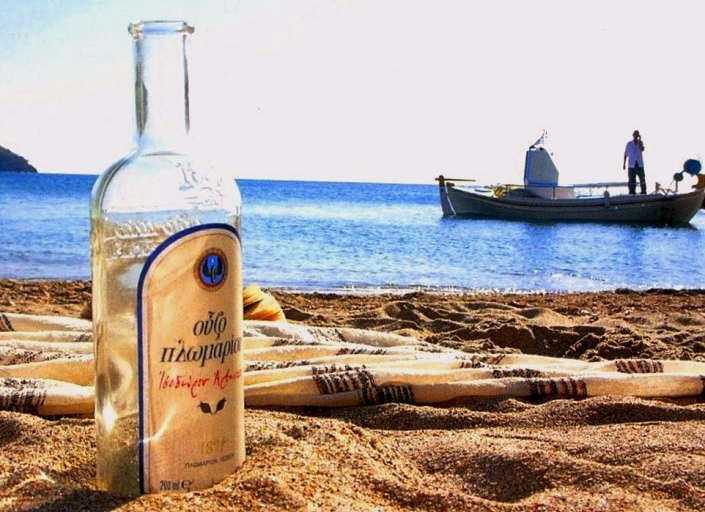 The anise-flavored aperitif that is widely consumed in Greece and Cyprus has been for many years considered to have various medical properties and health benefits for its consumers, if drunk in reasonable proportions, that is. Greek folk medicine spread from one generation to the other has tempted many to try ouzo instead of medicine in numerous cases of illness although actual scientific proof does not yet exist. For most people outside Greece, ouzo is a delicious aperitif that can bring lightheadedness and make spirits bright in no time.

Ouzo has been labeled as an exclusively Greek product and is particularly popular during the summer, served with mezedes (small portions of food) such as octopus, salad, sardines, squids, fried zucchini, and clams – and lots of ice. Yet, ouzo comes not only handy in the kitchen or while having fun with friends and family, but also serves medical purposes when needed.
The origin of the name “ouzo” is disputed. A popular derivation is from the Italian “uso Massalia” – for use in Marseille – stamped on selected silkworm cocoons exported from Tyrnavos in the 19th century. According to the anecdote, this designation came to stand for “superior quality”, which the spirit distilled as ouzo was thought to possess. Another hypothesis is that the word “ouzo” comes from the Turkish word üzüm ‘grape’.
Ouzo has its roots in tsipouro, which is said to have been the pet project of a group of 14th century monks living in a monastery on Mount Athos. Modern ouzo distillation largely took off in the beginning of the 19th century following Greek independence, with production centered on the island of Lesbos, which claims to be the originator of the drink and remains a major producer. When absinthe fell into disfavor in the early 20th century, ouzo was one of the products whose popularity rose to fill the gap; it was once called “a substitute for absinthe without the wormwood”. In 1932, ouzo producers developed a method of distillation using copper stills that is now the standard method of production.
Home made remedies employing ouzo make the best of both the alcohol percentage (which is not very high) and the properties of the herbs used to flavor the drink, such as cinnamon, anise, rosemary, coriander, mastic and other herbs, mostly depending on the area where it is produced.
Ouzo can of course be used as a very good antiseptic given its alcohol levels. Headaches and the flu can be well treated with a warm ouzo beverage before going to bed. Most Greeks have already used ouzo at a young age when they suffered  from a terrible toothache: that’s when grandmother would place a cloth dipped in ouzo on the aching tooth to alleviate the pain or instruct the child to wash their mouth with the bittersweet liquor. According to the elder’s wisdom, you can rub your tight muscles or joints with ouzo or mix ouzo with honey and take a shot before menstruation pain begins. In the Macedonia region, in older times, people would take a woolen cloth, dip it into ouzo, set it ablaze for a minute, flat iron it and then place it on the patient’s stomach area. If your feet are swollen or simply hurt after a harsh day, rub them with lukewarm ouzo. Even in cases of asthma, Greeks would dip a woolen cloth in ouzo and red pepper and then place it on the chest.