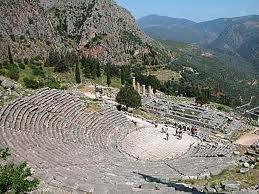 One of Greece’s favorite and most treasured archaeological sites, Delphi, will undergo 600,000 euros ($803,000) in restoration work through the Operational Program Thessaly – Central Greece – Epirus from 2007 to 2013, its Regional Director said.
This project involves the enhancement and preservation of the site, particularly the Temple of Apollo, the sanctuary of Athena Pronaia and the Gymnasium and Castalia, one of the most important archaeological sites in Greece, which is one of UNESCO’s cultural heritage.
As part of the project, several surveying actions on the sanctuary of Apollo are expected to take place. These actions include the mosaics maintenance and cleaning – fixation of surfaces of monuments, construction and placement of the Serpent Column, an ancient bronze column at the Hippodrome of Constantinople.
The project, also, includes the improvement of the functionality and aesthetics of the site as well as some interventions which aim at a better serving of disabled people. The Pan-Hellenic sanctuary of Delphi, where the oracle of Apollo spoke, was the site of the omphalos, the Navel of the World. Blending harmoniously with the superb landscape and charged with sacred meaning, Delphi in the 6th Century B.C. was the religious center and symbol of unity of the ancient Greek world.