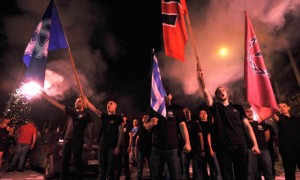 Capitalizing on growing social unrest over record unemployment, resentment against immigrants and rising crime, and planned new government austerity measures, the neo-Nazi Golden Dawn party has jumped into third place in popularity among Greek political parties, overtaking the once-dominant PASOK Socialists.
According to a Pulse survey, Golden Dawn, which won 18 seats in Parliament in the June 17 elections with 6.97 percent of the vote, now has 10.5 percent while PASOK, under new leader Evangelos Venizelos who has given his support to the ruling government of New Democracy Prime Minister Antonis Samaras, has fallen to only 8 percent.
The Democratic Left is also a member of the uneasy coalition government but, in a sign it is also feeling the wrath of disenchanted voters furious that the leftist members of the government have reneged on campaign pledges to resist more austerity measures, has fallen two points to only 4.5 percent.
New Democracy retains first place with 25 percent, falling from 29.7 percent after it won in June, but only one point ahead of the Coalition of the Radical Left (SYRIZA) which is at 24 percent and finished a close second in the elections. SYRIZA leader Alexis Tsipras has been hounding Samaras for going back on his word to try to renegotiate terms of a second pending bailout from international lenders who have demanded $14.6 billion in new cuts and more reforms.
The biggest beneficiary of growing disillusionment in Greece, however, has been Golden Dawn, which got only 0.29 percent of the vote in the 2009 elections, won by PASOK with 44 percent, showing how far the Socialists have fallen. Venizelos and Democratic Left leader Fotis Kouvelis are now reportedly trying to distance themselves from the coming cuts they had supported.
Golden Dawn’s platform, critics said, is based on hate, fear and xenophobia and the party is openly anti-immigrant and has been linked to beatings and attacks on immigrants, which it denies. Samaras, trying to gain the right as well, has initiated a roundup of illegal immigrants in a bid to ease public perception that the foreigners are to blame for rising crime as Greeks suffer waves of pay cuts, tax hikes and slashed pensions, with more coming.
(Sources: Kathimerini, AP, Reuters)