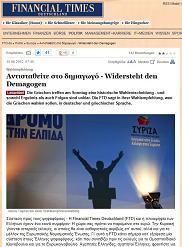 In today’s Financial Times of Germany, an article written in Greek urges the Greek voters not to vote for Syriza. In its article titled “Resist the demagogue-Αντισταθείτε στον δημαγωγό” FT urge voters to vote for New Democracy. As it claims, they should vote in favor of the painful but necessary reforms. It also underlined that cancelling the Memorandum without consequences is not possible and that Greece would have to leave the Euro in such a case. The editorial also says that New Democracy is not the best solution as it is partly the reason that brought Greece to its knees. But, as the article’s editors claim, ND is the lesser of two evils and must be preferred.  The writer ends by saying that the “other world Syriza is promising is non-realistic,” referring to Syriza’s slogan “another world is possible”.

The article has received criticism in Greece from every party. Syriza claimed that it proves that ND is just a puppet of big capital, Siemens, and that it will protect their interests instead of the Greek people. Mr Papadimoulis, ex-MEP of Syriza, said that from time to time we should expect Mr. Merkel and Mr. Schauble to come and give New Democracy leaflets out in the streets of Athens. New Democracy in a response to the article called it a fake provocation and said that Greeks are a people with pride and that New Democracy gets its power from the people.  PASOK’s spokeswoman, Mr Diamantopoulou, said that FT is acting as the department of Avgi (the partisan newspaper of Syriza). She claimed that not everyone wants Greece to remain in the Euro zone and we should be careful. KKE claimed that the FT aim was to generate discord and polarizing voters  by posing false dilemmas, underlined KKE’s general secretary Mrs Papariga.

The article shows that the writers are either extremely smart or extremely ignorant. If their goal was to support Syriza, they succeeded. FT and other international newspapers have received only a negative impression in Greece mainly by sticking to the stereotype of the lazy Greek. Thus, the FT are seen as the “bad guys” Supporting ND in their article will clearly turn a lot of people in favor of Syriza.  Also, the FT are not well-known in Greece and it is rather unlikely that any voter of Syriza or someone who is in despair would ever read regularly a pro-bail out newspaper written in German. So, if they wanted to support Syriza, they were effective. If they wanted to support ND though, they must hire a communications officer of Greek origin, because this amounts to a public relations blunder.