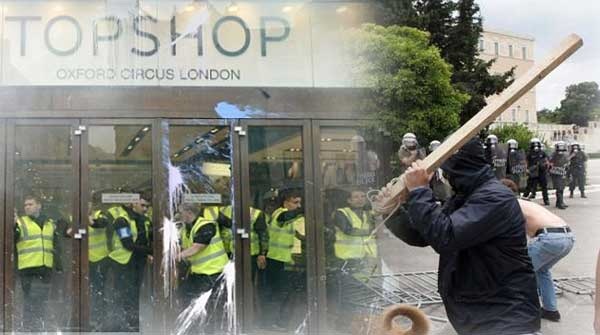 From being a comfy, cheap, utilitarian item, the hoodie has turned into a synonym of the most popular antisocial behavior gadget.
August 2011: as a result of a police fatal shooting, disaffected hooded youth burn houses, vandalize public property, and brake into high-street stores. The disturbing images on TV read like a déjà vu in my mind. Three years ago, it was the Athenian hoodies that made Greece resemble a failed state. This time the news headlines read Oxford Circus instead of Ermou. The two hooded revolutions come from two capitals that on the surface don’t bear much in common. So what’s the same and what’s different under the Greek and the British hoodie?
The style


For sure, in both cities a hoodie is a useful tool to avoid identification for a variety of city gang-related rituals. Yet for Greek and British teens alike, the intense group dynamics to conform to a collective identity and fit in means adjusting to certain prescribed outfit guidelines. In both cities, for the kids who live in the rough areas where violence is a part of their daily routine, the hoodie is, above all, a tool for blending in, rather than a statement of individualism. For some, there may be no choice but to wear one and bear its stereotypical associations.
The History
Historically, the hoodie is no stranger to the British lawless. In the Middle Ages, hooded tops were the garment of choice for 12th-century juvenile delinquents. Later on, the hoody became the trademark style for hooligans, rappers and Emos. In Greece, the hoodie connotations merely associate with executioners in ancient Greece and with traitors during the German invasion. The  current hoodie debate started back in the late seventies, after the collapse of  the junta, and continued to stir up controversy, with its climax being in the aftermath of the the 2008 riots when the leader of the far-right wing George Karatzaferis addressed the parliament, requesting that anyone wearing a hood be taken to court!
The trigger
Amongst other things the two hooded-events share in common is the trigger that started it all. To be precise, it was a police gun trigger, followed by a fatal shooting, a young man lying dead and a chaotic violent riot as a reaction to the incident. Whether the name is Alexandros Grigoropoulos or Mark Duggan is of little  significance. What’s striking is that the death of two young men at the center of two EU major capitals resulted in civil unrest with no intention of mourning the loss of human life whatsoever.
The Shock
On Saturday night of the 6th of December back in 2008 in downtown Athens, Athenians were out and about having dinner, drinks and enjoying themselves. Earlier this month on Thursday the 4th August in Tottenham, Londoners were trying to get to church, others were still trying to get home from night shifts or nights out. The reaction in both cases was the same.   Athenians and Londoners stood staring in disbelief at their disfigured high street, watching smoke from smoldering shops, standing on fragments of glass and bricks
The government

British as well as 2008 Greek shockingly violent riots happened on the watch of conservative governments that refused to even accept reality, let alone address the social, political and economic dimensions of the events. Instead, David Cameron, just as Kostas Karamanlis did back in 2008, went for the easy way out. He preferred to shove the problems under the carpet and mask the chronic frustrations of a rather big chunk of the British youth, with a populist “opportunistic motives” propaganda, dismissing the marginalized young protesters as common-law criminals. There is no reason to doubt that this is at least partly the case. But you would expect from two contemporary European leaders to take a closer look as to what’s really wrong with their countries.

British police did adopt a different strategy to the spray-the-cockroaches-master plan the Greek police usually applies to fight back the hurling of rocks and Molotofs. They didn’t however manage to take the situation under control in time and “lost face” in the eyes of the average Greek citizen, who considers Scotland Yard and London Metropolitan Police as the total opposites of ELAS (Hellenic Police Force): organized, effective and fast. Almost a week of humiliating mob rule, only 1000 of  feral thugs responsible for the orgy of violence, arson and looting were arrested. Scotland Yard Acting Commissioner Tim Godwin attacked ‘inconsistencies’ from Parliament over tactics putting all the blame on politicians while paying tribute to the bravery of his officers. The whole statement is almost identical to Greek police statements every time there’s a riot-Police blames politicians-politicians blame rioters and the left wing and so on.
The Ideology (provided there is one)
Greeks claim that the Athens riots had more of a political agenda than in London, despite the fact that in both cases the lashing out, and the viciousness of the destruction was similar. Greek riots  focused mostly around the administrative center and had more of an anarchist “Burn the Bank” initiative than teen looting. At some point British rioters also moved  from the project-heavy outlying suburbs  and penetrated the city center but went for Topshop instead. Images of teens looting symbols of wealth like i-pads from Argos, stigmatized London riots, leading British police to refer to an ideology-less “violent consumerism” revolution. Hungry rioters even payed a visit  at the Michelin-starred restaurant the Ledbury,Notting Hill, where chefs surged from the kitchens wielding frying pans to charge at them.
It might sound odd, but Greece and Britain’s youth seem to have a lot in common these days.  A savage employment market and ski high education costs, lead to future living standards likely to be lower than their parents and the prospect of home ownership sound like a bad joke. In Greece, hospitals and schools are being merged and the public sector has been forced to stop hiring short-term contract workers. At the same time, in the UK , youth projects targeting deprived areas, have been cut down dramatically. Both countries have embarked on a rash, course of austerity to address public debt and deficits whilst neglecting their people. Ideologies aside, alienation, anger and depression do constitute a good enough ideology triptych for any hooded youth to start smashing things.
The crowd 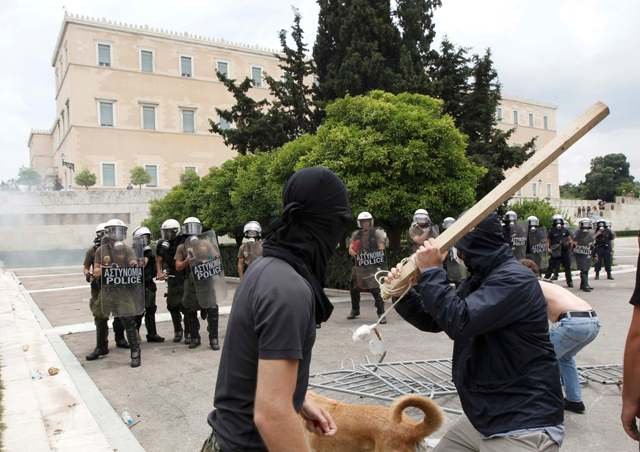 One of the reasons the Athenian hooded revolution seemed -falsely- more of an ideological venture, is the ’known unknown’ anarchists who have as a hobby burning central Athens in order to fight capitalism. Despite the fact they’ve been around more than thirty years, nobody ever gets arrested. PASOK and New Democracy, claim that the «μπαχαλάκηδες» as they call them, are backed up by the Coalition of the Radical Left (SYRIZA) and its leader, Alexis Tsipras. Tsipras on the other hand condemns them ‘as pure provocators’ and implies cooperation with ‘certain centers’. In the meantime, the real causes of 2008 as well as the 2011 riots, are overshadowed, no one  attempts to  distinguish between criminal behavior and legitimate furstration and the commercial center of Athens is literally deserted-lets face it no one likes tear-gassed shopping.
Other than the bunch of the “known-uknown” hoodies, the main body of Greek riots  involved a far greater cross-section of social and age groups, compared to teen-lead London riots. The Greek collectivist culture  results in Greek teenagers being “protected” more by the families than the British teens who in a purely individualistic culture and state-encouraged selfinshness, at sixteen are already working.  Greeks on the other hand, usually look for a job after they finish their undergraduate studies,do a couple of Masters or go on to do a PhD. Thus, reality strikes a bit later for them.
The Media
As in Greece in 2008, British media are also accused of applying its stereotypical paintbrush to the youth spectrum. The images of London’s “scourge” brandishing pieces of wood and carrying flat screen TVs result in dismissing all protesters as thugs causing trouble, looking to destroy and loot. At the same time, the prime minister of Britain, John Cameron, takes pride on the fact that  “…Millions of people have signed up on Facebook to support the police, coming together in the clean-up operations”-no comment.
The “revenge” 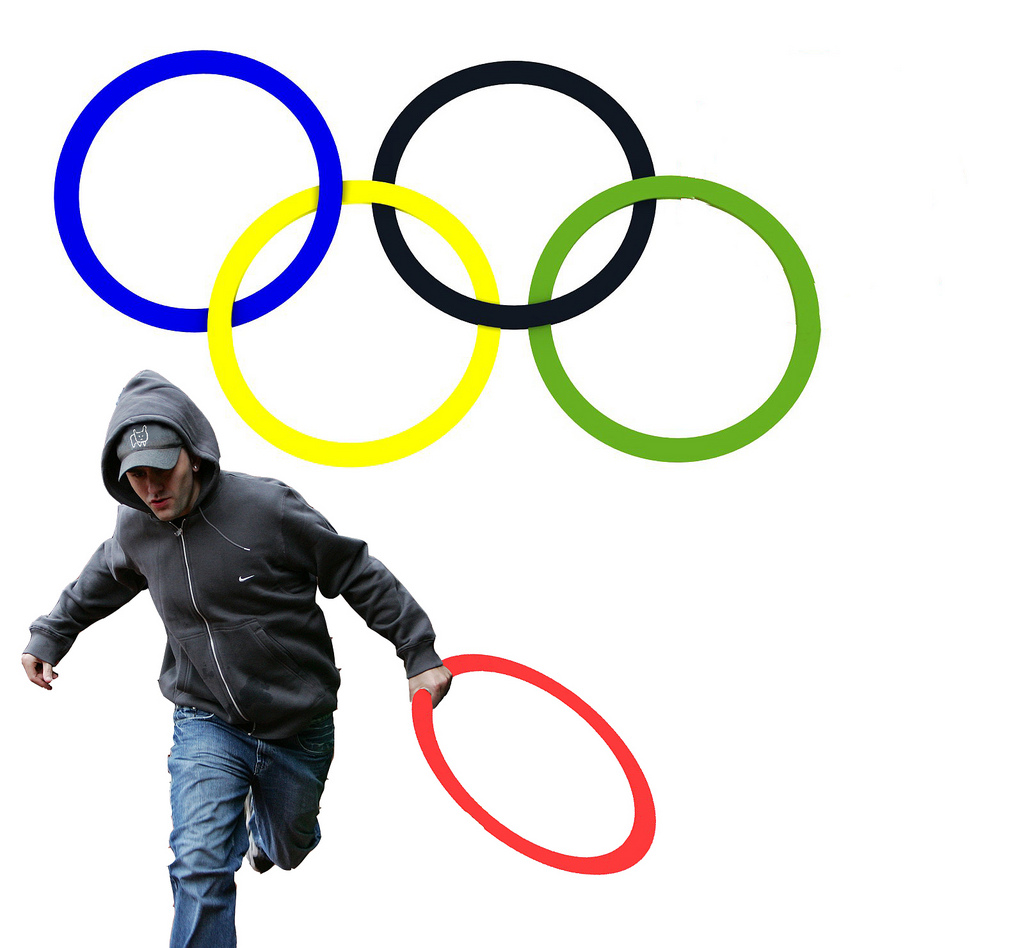 Back in May of 2004, it was the  British media who refered to Athens Olympic game police safety plan as  a Greek mythology legend. This time,  the clock is ticking towards 2012 London Olympic games and it is the Brits who taste the “bitter fruit” of dispute on whether they are capable to stage a safe Olympic Games.  Impotent policing astounded Greek media, who question whether London is a safe bet to hold the Games.
The Aftermath
If the rest of EU capitals don’t want to be Athens 2008 a good place to start is to listen to that part of European underclass that feels increasingly marginalized and is suffering the consequences of cuts, deprivation and uncertainty. Only by providing the communities of rioters with real motivation can the issue be solved. Government funding cuts for social policy, peanut salaries and tax increase will only make the problem worse. What riots in London made clear is that if your neighbor’s house is on fire -aka Athens 2008/2011, Paris 2005/2007, Madrid 2011- yours will also catch fire at some point-even if your house happens to be the most economically powerful capital in the world.