GRNews
GreekReporter.comGreek NewsEconomyGreece Ranks at the Bottom on Internet Speed in Europe

Greece Ranks at the Bottom on Internet Speed in Europe

Greece ranks at the bottom in Europe in terms of average internet speed according to a study by the European Data Journalism Network published earlier in the week.

With an average download speed of just 29 Mbps, Greece is in the last place regarding digital access throughout the EU.

As the country tries to attract more digital nomads and prides itself on being an attractive foreign investment location, the findings are a reminder that Greece is still far back in the digital transformation of the economy. 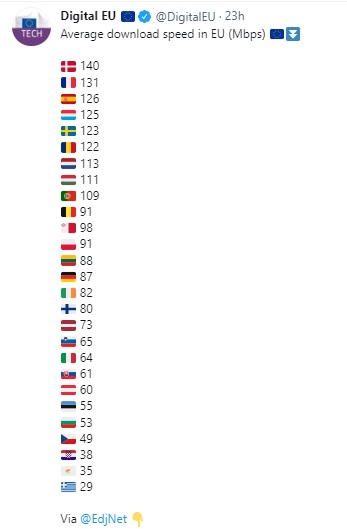 Denmark offers the best download speed in the EU with 140 Mbps, followed by France with 131 and Spain with 126. Cyprus is second to last, just above Greece, at 35 Mbps and Croatia is third from the bottom with 38.

On Tuesday, Greek e-Governance Minister Kyriakos Pierrakakis announced a call for the submission of binding bids for the development of Ultra-Fast Broadband (UFBB) services in the country.

The project is one of the biggest Public & Private Partnerships (PPP) projects in Europe at a budget of 700 million euros, of which 300 million euros comes from public funding.

The project’s target is to set up 750,000 high-speed internet connections at 100 Mbps, upgradable to 1Gbps, according to the guidelines of the EU’s “Connectivity for a European Gigabit Society” plan.

The Ministry’s digital transformation plan, alongside the UFBB project and other projects funded by the EU Recovery Fund, includes the implementation of 5G transmission corridors, and the development of submarine cables, as well as inland infrastructures and microsatellites.

The EU has set an ambitious plan for internet connectivity. It envisages that by 2025 there will be the following:

Many EU cities have a connection slower than 30 Mbps

The European Data Journalism Network report notes that in several EU countries a significant percentage of cities have internet connections slower than 30 Mbps.

In France, Italy and Latvia this percentage is just over 50 percent. The Czech Republic and Slovakia reach 65.4 percent and 70.1 percent, respectively, with peaks coming close to complete coverage in Cyprus (85 percent), Croatia (89.2 percent) and Greece (93.2 percent).

The countries which have substantially met the goal of at least 30 Mbps bandwidth nationwide are the Netherlands and Malta, where 100 percent has been reached, while just behind that mark are Denmark, Sweden, Lithuania and Luxembourg, then Finland and Belgium.

As for the other Digital Agenda goals (connectivity of at least 100 Mbps in all homes), the situation is quite similar. It should be said that the data does not specify whether the test was conducted in a home or elsewhere, for example a public office or school. Nevertheless, Luxembourg, the Netherlands and Sweden all surpass the 50 percent threshold, and Denmark stands out with over 91.9 percent of cities above the 100 Mbps threshold.