Greek Easter is full of ancient traditions and customs, followed faithfully throughout the millennia, making the feast a colorful one after the Lenten mourning for the Passion of Christ.

Many of the Greek Easter customs are particular to certain regions and might look peculiar to other parts of Greece, yet they are exciting and local people feel they are absolutely vital to the annual feast day.

Celebrating Easter on the Greek islands

In Heraklion, Crete, Easter feasting is not only for the living, but for the dead as well.

On Holy Friday, Cretans begin preparations to “dine” with their dearly departed on Easter Monday — and yes, this peculiar feast takes place in the local cemetery.

On Easter Monday, people visit the graveyards carrying food and wine to the burial sites which have already been cleaned and decorated for the day.

Relatives and friends of the deceased go to the cemetery and have lunch, including traditional dishes and sweets and exchange greetings. As they take part in this emotional ritual, they are not only honoring the memory of their dead but spreading the message of Christ’s resurrection.

The Rocket War of Chios

On the island of Chios, the locals from the village of Vrontados literally go to “war” upon the Rising of Christ at midnight on Holy Saturday.

The so-called war is between two local churches, where opposing parishioners fire thousands of homemade firecracker rockets at each other, while the more pious attend the Resurrection liturgy inside the two churches.

The objective is to hit the bell tower of the church on the other side. The rockets are wooden sticks loaded with an explosive mixture containing gunpowder and launched from grooved platforms.

On the islands of Kythnos and Lesvos, a swing is created in the main square on Easter Sunday, where girls and boys dressed in traditional costumes get on to swing back and forth.

If someone sways the swing, then they must pledge before God and man to marry the one sitting on the swing.

The Easter tradition of “Botides” on Corfu

Every Easter on Corfu, locals revive the old tradition of breaking “botides”, which are a special type of clay pot.

After the First Resurrection, which takes place in the island’s Metropolitan church, the bells of all churches begin to toll and people begin throwing thousands of botides filled with water and laurel from their windows.

The botides crash on the road and make a terrible racket, which in combination with the water and laurel is supposed to chase “evil” away.

Easter Sunday is filled with music from the island’s numerous bands which march around the city center playing songs. This joyous and beautiful event alone attracts thousands of Greek tourists each year.

On the island of Hydra, the Epitaph of the neighborhood of Kamini is blessed after entering the sea waters, while on the island of Zakynthos the priest and locals release white doves from the top of the church and their houses respectively after the first bell rings at midnight on Holy Saturday.

On Folegandros island, the icon of the Assumption is taken from the Church of Agios Georgios and then carried around town for three entire days. The icon procession passes through the homes of all religious people.

On Symi and Astypalaia, locals burn the effigy of Judas on Easter Sunday or the day after. The Judas dummy is stuffed with straw and wood and is first paraded around town before it is set on fire.

On the island of Patmos, where the Apostle John wrote the Book of Revelation, a representation of the Last Supper and the Washing of the Feet takes place in the central square.

On Kalymnos on Lazarus Saturday, there is a tradition in which the women bake man-shaped cookies, called ‘lazarakia,’ with a head, arms and legs.

Easter customs around the Greek mainland 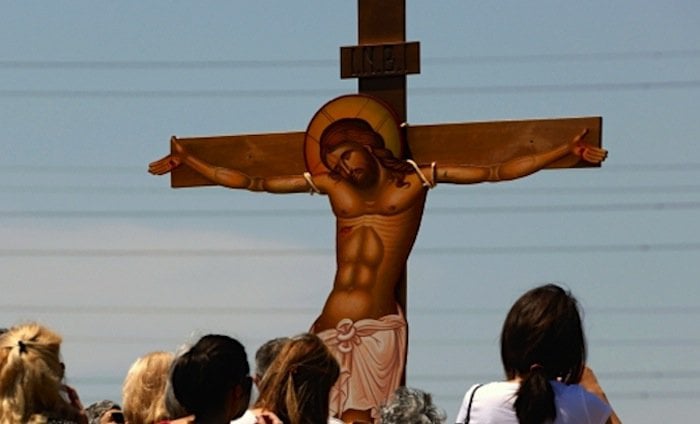 During the Second Resurrection on Easter Sunday evening, in the northeastern towns of Orestiada and Didimoticho the icon of Agia Anastasia is auctioned off. The one who bids the most will hold the holy icon while walking around the city in order to bless and protect it from evil.

In the Thrace region of northern Greece, an effigy of Judas Iscariot is paraded around by children in the streets who ask locals for branches so they can burn him.

On Holy Friday, the procession of the Epitaph stops outside a chapel, where the fire is ready to burn Judas. Once the priest begins reading the Gospel, they light the fire and burn the effigy. Later, they take a handful of the ashes and scatter them in the graveyard.

At midnight on Easter Sunday, locals of Leonidio in the Peloponnese release hundreds of homemade hot-air balloons, creating a stunningly lovely spectacle. The balloons stay in the air for 30 or 40 minutes before they are lost in the sky or burn up.

In Kalamata, also in the Peloponnese, the famous “saitopolemos” custom is observed, which stems from the 1821 Greek War of Independence, and the battles of the Greeks  against the army of Ibrahim Pasha.

The participants are divided into 10 to 15 teams, each consisting of 15 to 30 people, mainly young boys dressed in traditional costumes and armed with “saites”, cardboard tubes filled with gunpowder which are then lit on fire.

The custom is a understandably controversial one because it is very dangerous.

In the village of Arachova in central Greece, locals celebrate Easter along with the name day of Agios Georgios, a moveable feast which traditionally falls near Easter.

On Easter Sunday, a procession carrying the Agios Georgios icon parades around the village and winds uphill to the church. Over 3,000 villagers dressed in colorful traditional clothing follow the icon procession, while dancing troupes entertain the crowd.

At the same time, others in town prepare and light pits with fire from the Resurrection candles for the roasting of the Easter lamb.