A replica of the “Charioteer of Delphi” statue, a gift of Greece to Qatar, was unveiled at Doha’s metro station on Tuesday by Greek Culture Minister Lina Mendoni.

In an official two-day visit to Qatar to discuss cultural exchanges with government and museum officials, Mendoni unveiled the statue alongside Chief Executive Officer of Qatar Museums Ahmad Al-Namla.

The Greek minister spoke of the statue’s discovery by French excavators in 1896 — the year the first modern Olympic Games were held in Athens — and its unique eyes, made of semi-precious stone and glass, providing a very vivid impression.

“Many centuries later, the Charioteer becomes an ambassador of the friendship between Greece and Qatar,” said Mendoni.

“We chose to offer the Charioteer to the people of Qatar at a time which marks the strengthening of relations between the two countries,” she added. 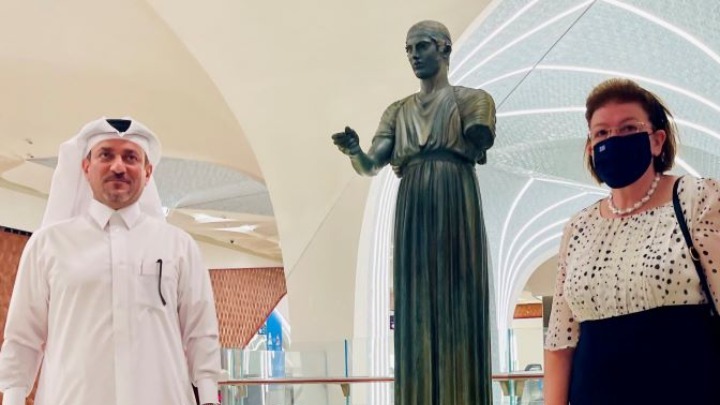 The life-size statue of the Charioteer of Delphi

The Charioteer of Delphi, also known as “Heniokhos,” is one of the best-known statues surviving from ancient Greece, and is considered one of the finest examples of ancient bronze sculpture.

The life-size (1.8 meter-tall) statue of a chariot driver was found in 1896 at the Sanctuary of Apollo in Delphi. It is now in the Delphi Archaeological Museum.

Most bronze statues from ancient times were melted down for their raw materials or were naturally corroded, but the Charioteer survived because it was buried under a rockfall at Delphi, which most likely destroyed the site in 373 B.C.

The statue is almost intact except that his left forearm and some details on the head are missing, including the copper inlays on the lips and most of the exquisite, silver eyelashes and headband.

The statue is one of the few Greek bronzes to preserve its lifelike inlaid glass eyes. Greek bronzes were cast in sections and then assembled. When discovered, the statue was in three pieces— head and upper torso, lower torso, and right arm.