Greeks in Lebanon have suffered -and are still sufering greatly- after the Beirut blast. A new film by journalist George Eid, who is part of the Greek community of Beirut, Lebanon, portrays the devastating effects of the August 4, 2020 blast that occurred at the port of the city — but also shows the indomitable resilience of the Greek spirit.

Eid, who as a newsman covered the explosion of the ammonium nitrate fertilizer which had been improperly stored at the port after the seizure of a ship many years ago, explores the many ramifications — political, social and psychological — of the blast and how it has devastated the fabric of the once-glittering port city.

At one time called the “Paris of the Middle East,” Beirut had descended into civil war in the 1970s as the country split into different political factions.

The country had never completely healed from the wounds inflicted in those times and was already facing severe social upheaval and possible economic collapse at the time of the blast. It was then faced with the devastation the explosion caused and with somehow figuring out how to begin the rebuilding process.

The country’s European-leaning political and social elite which have ruled the country for decades faced an onslaught, as they were blamed for bringing down the country economically while amassing their own wealth over the past decades.

There were even been reports of hunger in the streets in this once-beautiful city on the Mediterranean coast. 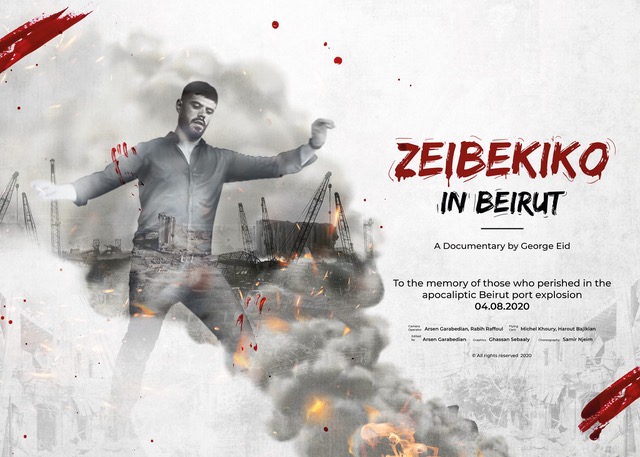 Abdullah Daher, a Lebanon-based correspondent from CBN, the Christian Broadcasting Network, commented at the time that after a year of near-daily demonstrations and unrest, with new politicians elected into office who have become even more unpopular than their predecessors, “We only see things as going from bad to worse.”

The indomitable spirit of Greeks in Lebanon

But giving up is simply not part of the Greek mindset. Its indomitable spirit shone in the film made by Eid, whose maternal grandfather was a refugee from Smyrna. He is currently waiting to hear if he will be granted Greek citizenship after applying two years ago.

His film shows a young man, undeterred by the utter destruction around him, dancing the zeibekiko in the middle of a room which once belonged to the Greek Club of Beirut and served as a Greek school, which has been almost completely destroyed.

Clearing a small space for himself to dance in the midst of the broken plaster, he twirls and jumps to the ancient tune, his knees white with pulverized plaster.

It is a scene straight out of Zorba the Greek, and Greek history itself — showing the refusal of the Greek spirit to bend to despair and despondency despite the chaos in the world around it.

Eid, who made the film on a noncommercial basis, was compelled to show the resilience of the human spirit in the face of the desolation and the despair that ensued as a result of the explosion — which was caused not by outside forces — but by the incompetence of the country’s own government.

The dance’s origins are from Asia Minor, where Eid’s own ancestors lived before they were made refugees. As he says in the film, “Zeibekiko encapsulates Beirut itself. It is sometimes unpredictable, just like life in Beirut. One moment you’re up — the other, you hit bottom.”

“Every Greek living abroad tries to find a way to combine experiences and situations with Greece even if at first glance they seem disconnected,” Eid explains to interviewers. “It is something that I inherited from my grandfather, and so I try to find something Greek in everything — and in this case with the zeibekiko I try to ‘dress’ the pain,” he says.

His voice breaks when he recalls what he experienced — and the reality that he continues to live — in Lebanon after the 4th of August this year.

“He dances with the ghosts of his past”

Speaking of the meaning of the dance for the one who performs it, Eid says “He dances with the ghosts of his past while others watch him from afar. You have to have faced the hardships of life to dance a real Zeibekiko,” he explains. “It is the dance of those who have known loss in life.”

“Zeibekiko,” he relates, “is a personal moment, like prayer time. It is performed humbly and with dignity. A man dances it with himself and with his demons.”

Remnant of Greeks in Lebanon

Annoula Armau, a family friend who is interviewed in the film, has unsettling things to say in her commentary, which shows that she and many others in the small remnant of a Greek community in the Lebanese capital are also haunted by the specter of what the future may hold for them in the ruined city.

“I am afraid, because this is not a normal life anymore,” she states with trepidation.”You never know what is going to happen next in Lebanon. We are only expecting the worst to come. There are a lot of Greeks who want to leave Lebanon. They want to leave with their kids and families. Greece must help them,” she states imploringly.

Several years ago, Eid produced a film on the Greeks of Lebanon, called “Kalimera men Beirut.” But tragically, many of the places he portrayed in that film — already at risk because of the depletion of the Greek community in the area — are now obliterated, destroyed by the blast at the port.

In 2019, the journalist founded the first Greek festival for the Greek comunity in Lebanon, in the city of Byblos — the city that gave its name to the Greek word for “book” and ultimately, the Bible. The festival ended up being a smash success, bringing together cultures in a festive atmosphere of fellowship and positivity.

“My goal is to keep alive the memory of the once state-owned Greek community in Beirut and to send perhaps a message of hope,” Eid states. “It is a way to keep my identity alive despite the fact that only my DNA is what connects me to Greece. I may not have Greek citizenship, but I inherited many of the Greek values ​​and I intend to pass them on to the next generations.”

Eid just became a father a few months ago with his wife Rana — and they gave their daughter the Greek name of Eleni.

“Three years (after I filmed the documentary) there is almost nothing left of what is portrayed in it,” said the Lebanese journalist. But he appears to have kept the promise he made on the occasion of the first documentary: “I will continue, with all my forces, to try to keep alive the flame of Greeks in Lebanon.”