Dog Torturer on the Run as Greece Hails Brave Vet 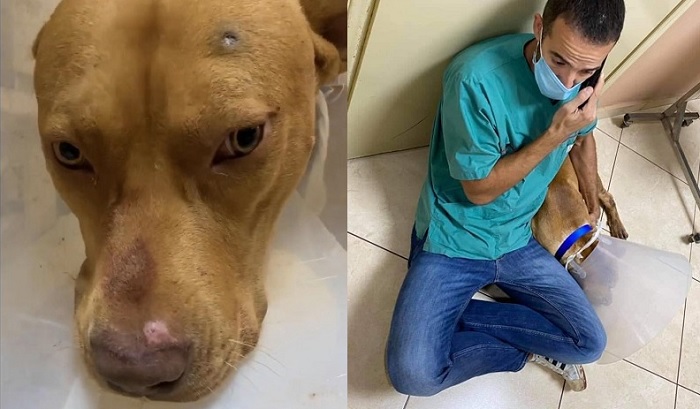 Greek police are currently hunting down a 55-year-old man from the city of Chania in Crete who viciously abused his dog.
Thanks to the brave actions of a heroic vet, the traumatized canine was brought back to health and is now ready for adoption.
In agony, the dog had suffered extreme torture from its owner, having been hanged and its genitals mutilated, and required hours of medical care.
Apparently, the adorable pup was abused because he simply wanted to play with toys.
After a witness heard the dog’s frantic cries of pain on Monday, he rushed it to the veterinarian for emergency treatment. Reportedly, the man who saved the dog is a German animal-lover who is known to help stray animals in the area.

The veterinarian, Kostas Terezakis, now hailed around Greece as a hero,  refused payment for caring for the dog, despite the long and difficult hours he spent treating the pup’s horrific injuries.

In a statement to the Greek media, Terezakis claimed that it was the first time he had witnessed a dog with such severe injuries survive.
Despite suffering abuse, which had been going on for quite some time, as it had old injuries, and an hour-long surgery, the dog was never aggressive to Terezakis or any of its rescuers.

The playful dog is now running and jumping with joy. Restored to complete health, he is finally ready to become someone’s new best friend. Currently, he is ready to be adopted by the loving owner he so deserves.

Another incident of police brutality became recently known in Greece, this time in the city of Larissa.
Business