France Boosts Military Presence in the East Med; Calls on Turkey to Behave 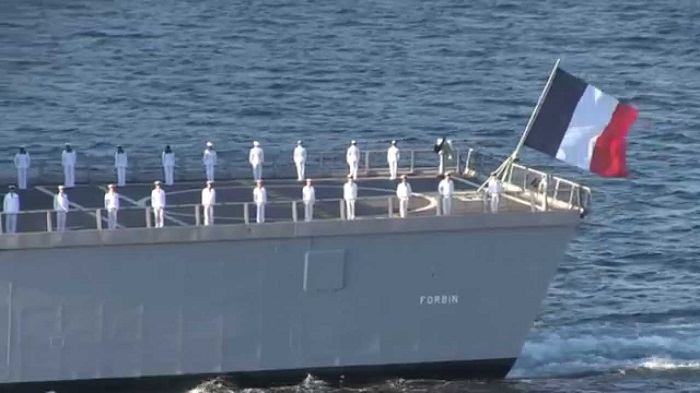 France will increase its military presence in the eastern Mediterranean, President Emmanuel Macron said on Wednesday, calling on Turkey to halt the oil and gas explorations in disputed waters which has heightened tensions with Greece.
“The situation in the eastern Mediterranean is worrying. Turkey’s unilateral decisions on oil exploration are causing tensions,” the French leader tweeted in both French and Greek.
“These must end in order to allow a peaceful dialogue between neighboring countries and allies within NATO,” he said, adding: “I have decided to temporarily strengthen the French military presence in the Eastern Mediterranean in the coming days, in cooperation with European partners including Greece.”

A short time later, Greek Prime Minister Kyriakos Mitsotakis thanked The French leader, tweeting “I thank President Macron for his solidarity. @EmmanuelMacron is a true friend of Greece but also a fervent defender of European values and international law.”
Earlier, in a televised address to the nation, the Greek leader sent a defiant message to Ankara saying that “Greece will not succumb to threats and blackmail.”
On Monday, Ankara sent seismic survey vessel Oruc Reis in the Greek continental shelf accompanied by warships, and it has remained in that area ever since that time.
Macron had already called last month for EU sanctions against Turkey for what he described as “violations” of Greek and Cypriot sovereignty over their territorial waters.
At a time when the sovereignty of Greece and Cyprus are questioned by Turkey, Macron said that Europe “should not leave our security in the Mediterranean in the hands of other actors.”
“I want to express France’s full solidarity with Cyprus and Greece in the face of Turkish violations of their sovereign rights. We must not accept that the maritime space of an EU Member State is threatened,” Macron wrote in Greek.
Greek FM to meet with US Secretary of State Pompeo
Greek Foreign Minister Nikos Dendias will have an emergency meeting with US Secretary of State Mike Pompeo in Vienna on Friday.
According to the Ministry of Foreign Affairs, the two officials will discuss the tensions generated in the Eastern Mediterranean in light of Turkey’s most recent provocative acts.
Additionally, the Council of Foreign Ministers of the European Union will convene by teleconference on Friday at Greece’s request.
Israel supports Greek rights in the Aegean
Israel is closely monitoring developments in the eastern Mediterranean, according to a statement issued by the Israeli Embassy in Greece on Wednesday.
“Israel is closely following as tension rises in the East Mediterranean. Israel expresses its full support and solidarity with Greece in its maritime zones and its right to delimit its EEZ,” the announcement stated.