GRNews
GreekReporter.comGreek NewsDiplomacyGreek PM Mitsotakis: "Greece Will Not Succumb to Threats and Blackmail"

Greek PM Mitsotakis: "Greece Will Not Succumb to Threats and Blackmail" 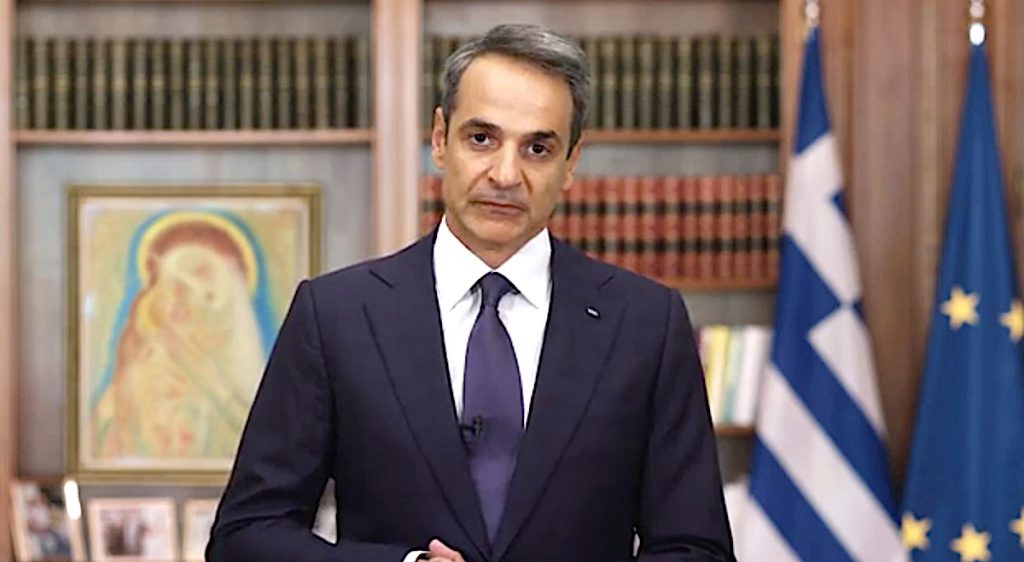 On Wednesday, Greek Prime Minister Kyriakos Mitsotakis made a major foreign policy speech in response to this week’s ongoing tensions in the Mediterranean, sparked by the sending of an oil and gas exploration vessel to the waters between Crete and Cyprus.
In a televised address to the nation, the Greek leader stated “Greece is a proud and strong country.
“A member of the European family and pillar of stability in the Eastern Mediterranean. We remain steadfastly committed to the principles of International Law and the rules of good neighborliness. We seek with all bridges of peace, good faith and cooperation.”
The Prime Minister continued, saying “Our country is not threatened or blackmailed. And that is exactly why it does not succumb to threats and blackmail. Nor, however, does it tolerate provocative actions.
“With this policy of principles, we have negotiated and signed the Maritime Zone delimitation agreements with Italy and, most recently, with Egypt. Agreements fully compatible with the Law of the Sea,” he noted.
“Agreements that prove that when there is a climate of trust, multi-year disputes can finally be resolved which ensure the progress and prosperity of the peoples, always within the framework of International Law.
“In the same context of legitimacy, with confidence, we are ready to talk to all our neighbors. We are not afraid of dialogue, even the most difficult, because we have faith in the law of our positions. But dialogue with challenges, and in a climate of tension, is obviously pointless.
“Turkey’s reaction to the perfectly legal EEZ delimitation agreement with Egypt shows, unfortunately, that it cannot reconcile with the European principles of the 21st century. And that it remains attached to the logic of coercion and intimidation. Logic that belongs to other eras.
“With this attitude, however,” PM Mitsotakis noted, “it also proves the pretentious nature of its supposed readiness for dialogue. Why, how is it possible for a perfectly legal agreement of one state with another to be used by a third state as a pretext for withdrawing from exploratory contacts before they even restart?
“At the same time, in fact, that Turkey itself signed with the Administration of Tripoli, in Libya, a non-existent and illegal memorandum. And which, with the repeated challenges, tests the endurance of Greece and Europe.
“The militarization of the situation by Turkey is also an admission of the absence of legally strong positions, because the projection of power is nothing but an attempt to compensate for its weakness in matters of law.
“Responding to the development of its fleet, we also developed our own, putting our Armed Forces on alert. I am sure that all Greeks have the same absolute confidence in the capabilities of our Armed Forces that I have,” the Prime Minister declared.
“In the challenges we maintain the strength that comes from our composure and wisdom. But at the same time, we remain in absolute political and operational readiness.
At the same time, we are activating our diplomacy. We inform friendly countries and the international public opinion. And we are mobilizing allies and partners. ”
The Prime Minister also pointedly stated “We are not alone in this effort. The immediate response of the European Union to our request for the convening of the Foreign Affairs Council confirms that the issue is not only about Greek-Turkish relations, but also the relations of the whole of Europe with Turkey.
“Continuing, therefore, the policy of aggressive provocations, the only path that Turkey opens is that of strong sanctions against it. And this at the same time that powerful states, with significant global and regional power, are drafted with the law of our positions.
“I emphasize again,” the Greek leader stated, “We answer, we do not provoke. And we firmly hope that logic will finally prevail in our neighboring country so that a bona fide dialogue can begin. Based on International Law and mutual respect for the one dispute that is the subject of discussion and possible recourse to an international court: The delimitation of Maritime Zones in the Aegean and the Eastern Mediterranean.
“We do not raise flags of opportunity,” PM Mtsotakis declared. “We raise the attitude of responsibility and legitimacy. Why make serious foreign policy with propaganda photos from non-existent seismic surveys? Or with nationalist frenzy in state-controlled media?
“Let everyone know,” the Greek Prime Minister stated in conclusion, “the risk of an accident lurks when so many troops are concentrated in a limited area. And the responsibility in such a case will be borne by the one who causes these conditions.”