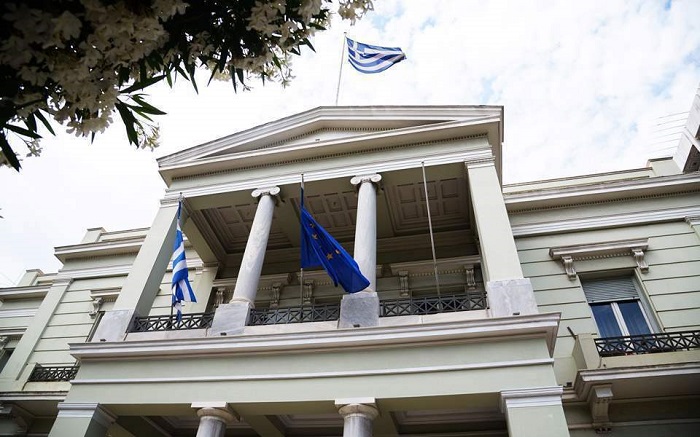 The Greek Foreign Ministry on Saturday dismissed as “fake news” reports that Turkish soldiers have “invaded and occupied” a patch of Greek land in the northeastern Evros border area.
“There is no foreign force on Greek territory,” the Ministry said in a statement, responding to reports in both Greek and British media.
Greece’s Foreign Minister Nikos Dendias wrote on Twitter that “it’s a shame how someone takes on fake news and claims that their country’s territory has been occupied by a foreign power. The ludicrousness goes hand in hand with irresponsibility.”
The reports came after Athens lodged a demarche with Ankara over its presentation of a section of Greek territory in the southern Evros border region as Turkish.
The area in question is Melissokomeio, near the southern part of the Evros River.

Athens says that members of Turkey’s police special forces have had a presence in the area in recent weeks, blocking the work of the Hellenic Army’s geographical service in view of the expansion of a border fence to the southern section of the Evros River.
Greece wants to expand the border fence in order to avoid a repeat of the scenes in March when thousands of migrants massed at the border trying to cross into Greece.
Athens is clearly seeking to play down the incident, but observers point out that it was the Foreign Minister himself who raised the issue of a border dispute with Turkey on May 20. There are also questions on why he instructed Greek diplomats to issue the diplomatic protest to Ankara.
He told state broadcaster ERA FM earlier in the week that Greece was not about to create tension for “a few dozen meters” of land.
“I don’t like to create tension between two countries that are allies. There could be measurements and a joint committee to solve such issues. We speak of a few dozens of meters,” he said, then added:
“I hope we reach an understanding. There is a matter of a dispute of the exact border, due to changes in the river’s banks. […]. I don’t like to create tensions between the two countries, which are allies. […] The appropriate measurements can be made and these things can be resolved in a joint committee. We’re talking about a few dozen meters,” Dendias said.