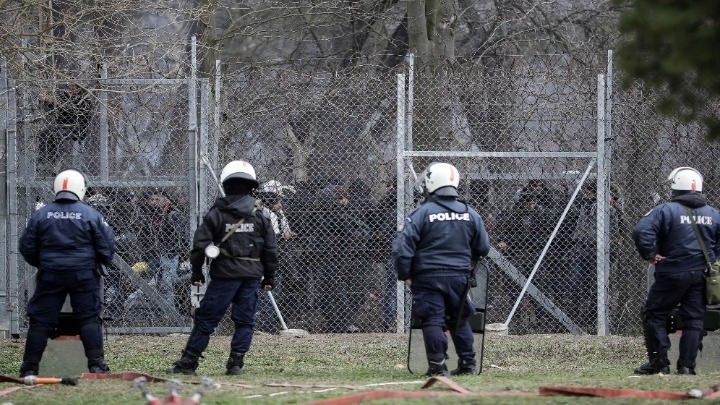 Tensions flared up again on Wednesday evening along the Greek-Turkish border at the Evros post of Kastanies.
Turkish authorities reportedly threw tear gas while refugees hurled stones and other objects to the Greek side of the border fence beginning at 6:00 pm Wednesday and for at least three hours while Greek police stationed in the area foiled their repeated attempts to break through.
Similar incidents took place at Kastanies on Tuesday.
Despite the flare-ups of tension and clashes on the borderline, works to further reinforce the existing fence are continuing normally, Greek authorities said.
An estimated 2,000 migrants are still camped out on the Greek-Turkish border, weeks after Turkey declared its borders to Europe open and encouraged migrants and refugees living in the country to try crossing into the European Union nation of Greece.
Tens of thousands of people headed to the frontier despite Greece’s insistence that its eastern border, which is also the EU’s external border, was closed.

The "Lap Pool House," a modern house built on a slope of the Cycladic island of Tinos, is nominated for an EU award for Architecture.
Greece