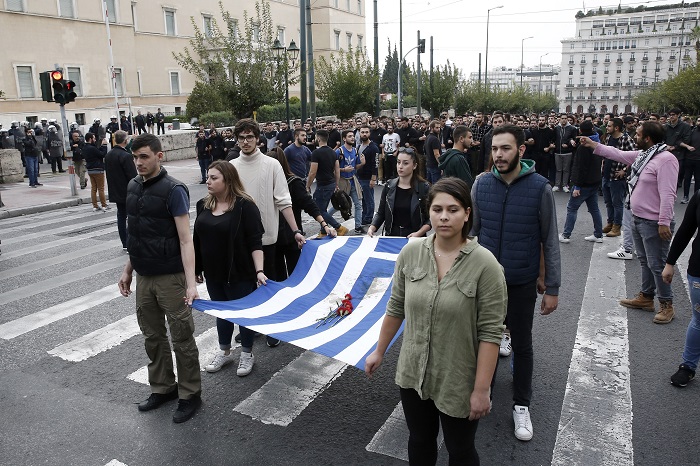 Thousands marched on the streets of Athens toward the US Embassy on Sunday to commemorate the anniversary of the Polytechnic uprising and the victims of the deadly 1973 crackdown by the police and the army of a student uprising against the military dictatorship which ruled Greece between April 1967 and July 1974.
Shouting mainly anti-government and anti-American slogans, the protesters, the majority of whom came from various leftist groups, demanded the removal of American bases from Greece and blamed US imperialism for the infliction of the military junta on the country.
Among the protesters was former PM Alexis Tsipras, who is thought to be the first former Greek Prime Minister to have ever joined the march.
Tsipras said through Facebook that “46 years after the uprising we honor those who gave their lives for freedom.” He added that “we also honor those who resisted the American-instigated junta and paid the prize of persecution, torture, imprisonment and exile.”

Ahead of the protesters, leading the march, was a group of university students who carried the bloodstained Greek flag which was used by the students on that night.
During the march, nearly 5,000 policemen were on duty, closely monitoring the procession.
The demonstration begins every year, at the gates of the Polytechnic School of Athens, where the authorities of the military junta had sent a tank to crush the entrance gate as it cracked down on rebellious students holed up inside. The commemorative march ends every year outside the American embassy in Athens.