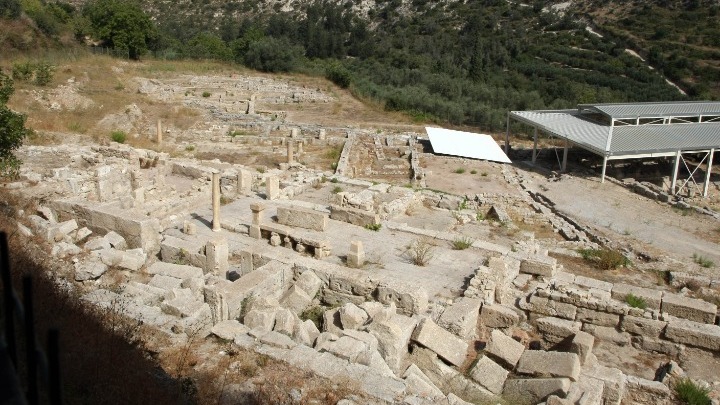 The Eleftherna region in the prefecture of Rethymno, Crete aims to become the most important tourist destination on the island by capitalizing on the wealth of archaeological treasures discovered in the area, as well as its gleaming new museum.
Also called “Apollonia” at one time, Eleftherna was an Ancient Greek city-state lying 25 km (16 miles) southeast of Rethymno in the Rethymno region of the island of Crete. Archaeologists have carefully excavated the site, which is located on a narrow northern spur of Mount Ida, the highest mountain on Crete.
Professor Nikos Stampolidis, whose name has become associated with the many discoveries made in ancient Eleftherna, as well as the museum itself, focused on the need to link culture with tourism in a recent speech.
After yet more new, fascinating finds were unearthed in ancient Eleftherna, he and other archaeologists have now begun to view this area as the “heart” of Crete.
According to remarks made by Stampolidis at an event organized by the Grecotel group and the Nikos Daskalantonakis Foundation, it now stands as the second major pillar of ancient Cretan civilization, after Knossos and Phaistos.


He underscored that it tells the story of the dawn of Greek civilization, of the post-Minoan era against the counterweight of Knossos and the one-sidedness of Crete’s Minoan past.
Following the ancient finds made recently at the most important archaeological site in Rethymno, Stampolidis’ discovery of two Christian basilicas in Eleftherna adds yet another new aspect to the area’s cultural profile, which had previously solely been identified with the heroes of Homeric times.

Stampolidis said that archaeologists are currently examining whether these two churches were built by Christians by destroying intact pagan monuments and buildings or if they repurposed already-abandoned monuments of the ancient world.
“Did the Christians act as jihadists or simply peacefully write their own story?” asked the professor.
The museum of Eleftherna welcomes over 600 visitors a day. The most innovative feature of the museum is perhaps that all its exhibits will be periodically renewed with new finds from the ongoing excavations.
The museum believes it will always be able to keep interest in its collections fresh, since its exhibits will continue to be updated with the most recent revelations from the ongoing work at the archaeological site.
Source: AMNA