Greek President Calls on the World to Recognize Pontian Genocide 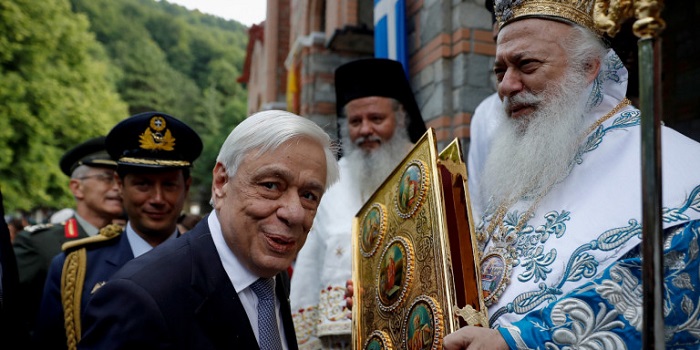 Greek President Prokopis Pavlopoulos on Thursday joined thousands of Pontian Greeks who gathered at the church of Panagia Soumela at Mt. Vermion in northern Greece to celebrate the Dormition of the Virgin Mary.
Pavlopoulos attended a memorial service in memory of the estimated 353,000 victims of the Pontian genocide and called on the international community to recognize the atrocity committed by by the Turks.


As this year’s festivities coincide with the 100th year anniversary of the Pontian genocide, Pavlopoulos said that “this act of barbarism will remain etched in human memory forever.”
He also called upon Turkey to offer “a sincere retrospective apology,” and to stop the “tactic of ruthless counterfeiting of irrefutable historical evidence.”
The celebrations at Panagia Soumela focused around sacred treasures of the church, including the icon of the Virgin, which is believed to have been painted by Luke the Evangelist.
The church at Mt. Vermion was built to to honor the magnificent Panagia Soumela Monastery, which was built into the face of a cliff, and remains a major pilgrimage site of the Greek Orthodox in Turkey.