GRNews
GreekReporter.comGreek NewsCultureThe Feast of the Dormition of the Virgin Mary is Celebrated Throughout... 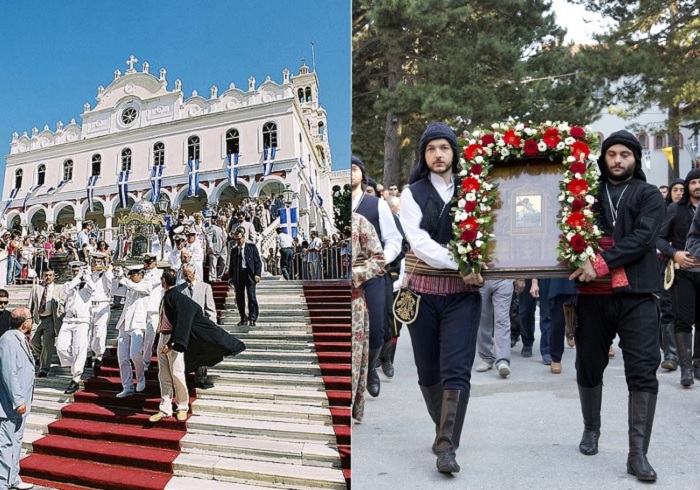 Greece marks the Feast of the Dormition of the Virgin Mary, one of the most important days in Orthodox Christianity, in many different ways on August 15 every year.
This day is a beloved public holiday which is also often referred to as “The summer Easter” — and people celebrate it by attending religious services, throwing parties, and even holding sailboat races.
Every region in Greece has a story of the Virgin Mary (who is called “the Panagia” in Greek), and every part of the country holds a festival every August 15th to celebrate Her.
The great churches of Panayia Evangelistria on Tinos, Panayia Ekatontaliliani on Paros, and the Monastery of Panayia Soumela on Mt. Vermio are the most-visited places of religious pilgrimage in Greece at this time of year.
The Virgin Mary is a sacred figure for Greeks for both religious and national reasons. Being the mother of Jesus is only one of the reasons why Greeks revere her.
The Virgin Mary is also thought to be deeply connected with the freedom of the Greek nation, and in many ways she is considered to be the mother of all people as well as a symbol of protection and comfort.
This has resulted in variations of different names being given to her throughout the country by locals wanting to thank the Panagia for her help in their times of need.
In every church and chapel dedicated to the Panagia, she is given a descriptive name which indicates either the miracles she is expected to perform or the graces with which she is endowed.
For example, there is Panagia “the Healer,” “the Merciful,” “the Graceful,” “the Sweet-Talking,” “the Savior of Souls,” “the Mistress of the Angels,” “the Philanthropist,” … and the list goes on.
Here are some insights into the many ways Greeks celebrate this holy day throughout the country.
Tinos Island
Many excavations were carried out to locate an icon of the Virgin Mary that was thought to be buried on the island after a nun living on the island dreamed of the icon one night. An icon of the Virgin Mary was indeed found buried there on Jan. 30, 1823.


The story goes that St. Pelagia, a nun living on Tinos, dreamed of a lady who explained to her how much she had suffered, having been buried for many years.
In St. Pelagia’s dream, the lady ordered her to wake up early the next morning and begin digging in the field of Ant. Doxaras to uncover a sacred icon. 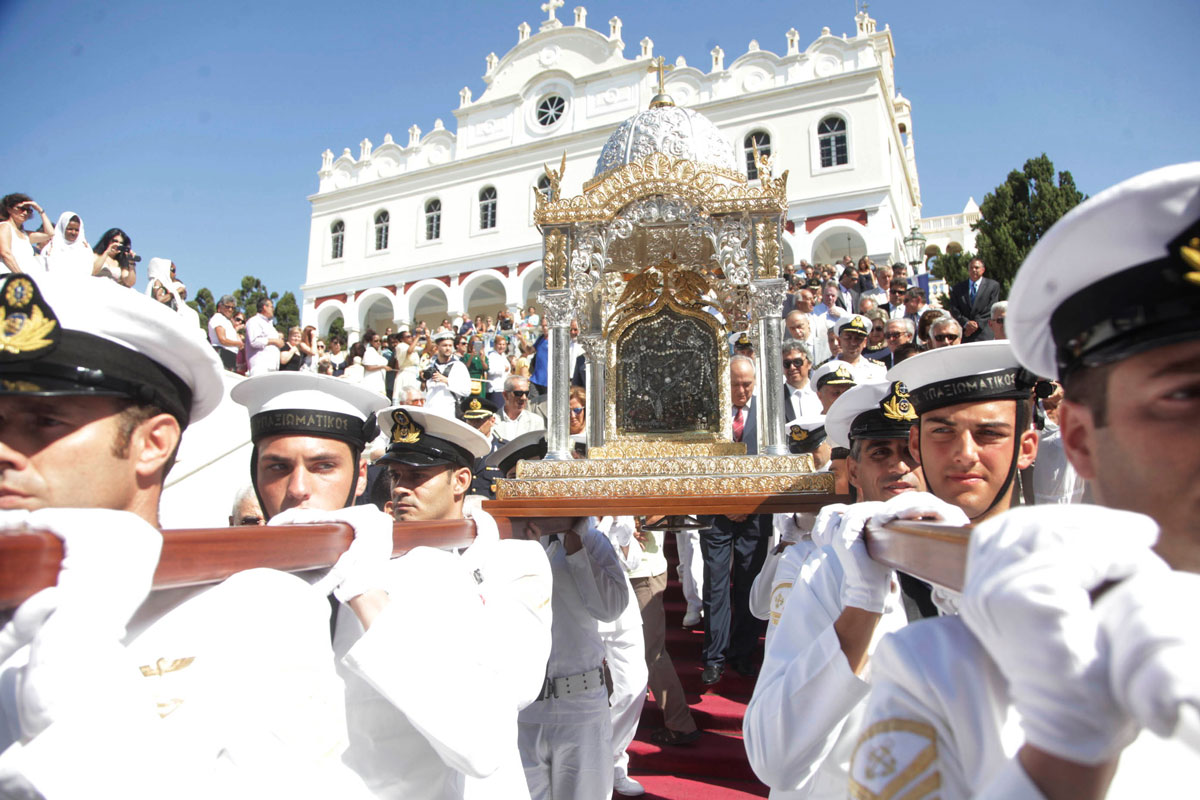 Eventually, an icon of the Virgin Mary was uncovered, and just a few years afterward, officials decided to celebrate the feast of the Virgin Mary annually, on the date of her Dormition.
From the early 1800s until today the island has celebrated Her Grace for an entire week, from Aug. 15-23.
Imathia
Throughout the area of Imathia, the ultimate symbol of Pontian worship to the Virgin Mary is embodied in the ancient icon of the Panagia Soumela. 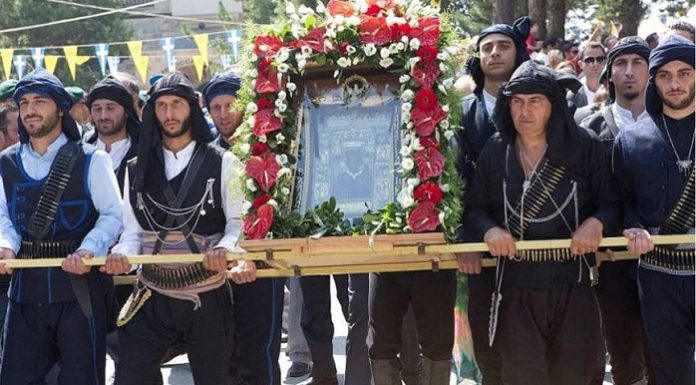 The descriptive name given there to the Virgin Mary, “Soumela,” comes from the tale of how, in the late fourth Century AD, the Virgin Mary appeared to the monks Sofronios and Varnavas. She asked them to build a monastery dedicated to Her, and led them to Mount Mela.
The Virgin Mary is called Soumela, since in the Pontian dialect “sou Mela” means “at Mela Mountain.” The priceless icon of her by the same name, thought to be originally painted by the apostle Luke, had resided at the original Soumela monastery, which is now located in Turkey.
The icon was spirited away and buried in a hole in the ground for safety before the monastery was taken over by Ottoman forces, but was found many years later in its place of safekeeping. It now resides in the new Panagia Soumela Monastery, near Veria.
Paros Island
The legend of the church of Virgin Mary on Paros is also steeped in history. 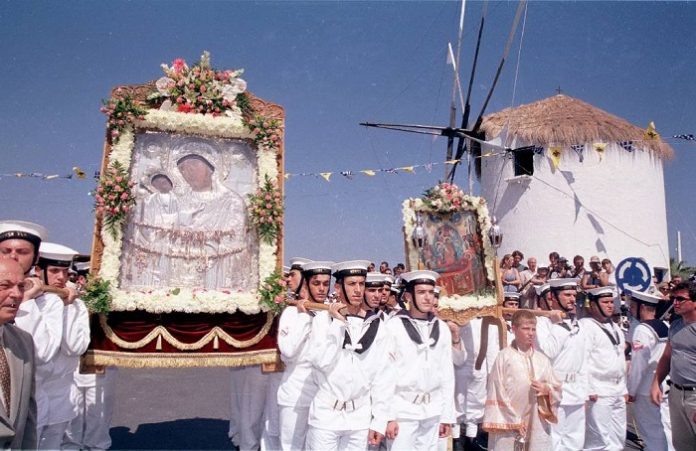 The church, known as the “Church with 100 Doors,” is also referred to as “Panagia Ekatontapiliani.” It has 99 visible doors — plus one that will only become visible when the Greeks take Constantinople (known today as Istanbul) once again.
Kefalonia Island
Local people here celebrate this holy Feast from Aug. 6 through 15 in the village of Markopoulo on the island of Kefalonia. Many snakes of all kinds and sizes are found inside and outside the Church of the Dormition of the Virgin Mary there, earning them the name The Virgin Mary’s snakes. 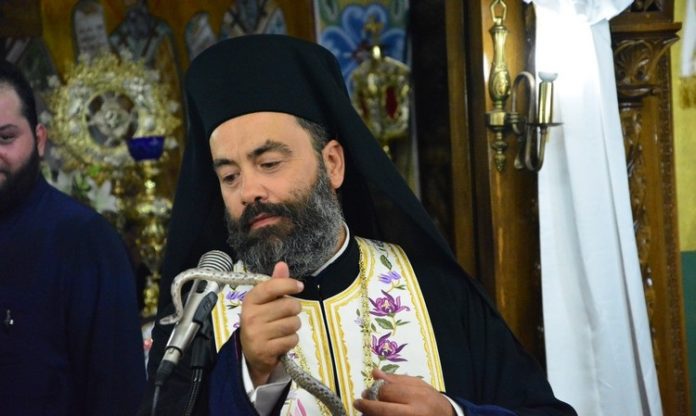 The snakes are a part of a legend on the island which says that nuns from the convent there asked the Virgin Mary to save them after pirates attacked the convent somewhere around the year 1200. Many snakes then suddenly appeared between themselves and the marauding pirates, saving the nuns from a terrible fate.
And snakes have appeared almost every year in the nearby church on Assumption Day since that fateful day centuries ago. If they do not appear, locals say that it portends bad luck – and proving this legend to be true, they did not appear in both 1940, during the Second World War, and in 1953, when Kefalonia was hit by a deadly earthquake.
Koufonissia Island
In celebration of the Dormition of the Virgin Mary, worshippers on the island of Koufonissia gather around the church after services and enjoy a feast in Her honor. They then hold a sailboat race in the harbor to celebrate Her Grace. 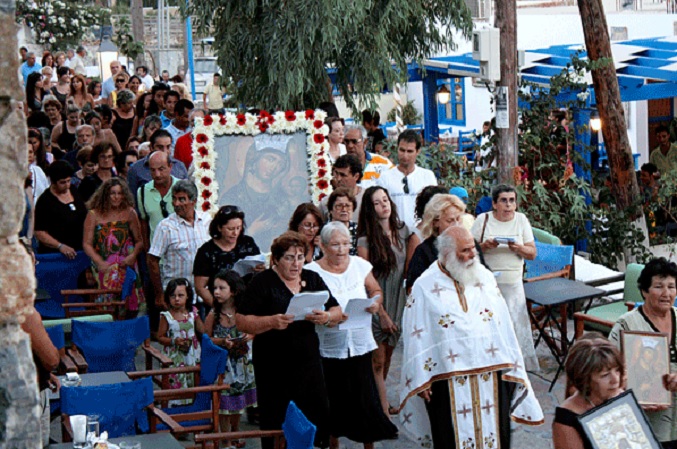 Alonissos Island
This Aegean island celebrates this holy day on Aug. 15. If you are visiting this beautiful Northern Sporades island on this day, be sure to not only watch, but participate in, the reenactment of a traditional wedding. 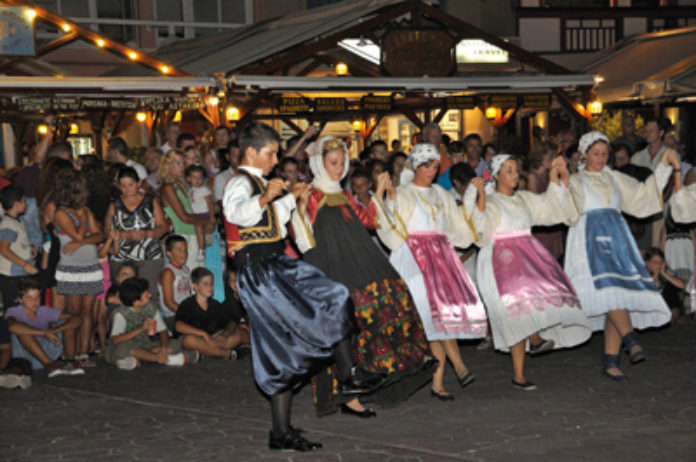 Locals dress up as guests who take on the role of relatives in the wedding, while the bride appears in a traditional dress, called a “morka.”
The groom, best man and wedding guests attend the celebration at the church and then everyone celebrates with live traditional music played on the lute, violin and clarinet, and dances traditional folk dances.