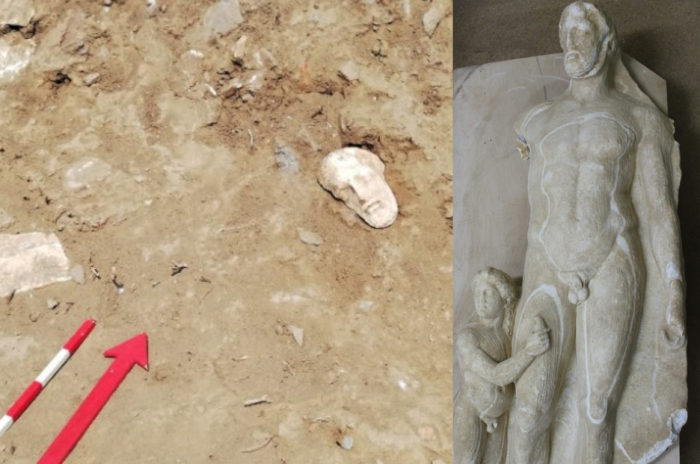 A significant number of tombstones from Greece’s Classical Age, decorated with elaborate designs in relief, were unearthed recently during an excavation conducted by the University of Athens at the Tomb of the Classical Age in Xobourgo, Tinos.
According to the Greek Ministry of Culture, the importance of these sculptures is immense, as they provide critical information for understanding the development of classical sculpture on the island.
As examples of high quality sculpture dating from arpproximately the fifth century BC, they are a link between the history of ancient sculpture and the later sculpture originating from the island.
According to a statement from the Ministry of Culture, the cemetery site is located on the southeastern slopes of Xobourgo Hill. It represents the main classical-era cemetery for the ancient settlement that was developing at that time on the western and southern slopes of the hill.


The settlement, which was found to be fortified by a Cyclopean wall dated shortly before 1000 BC, was considered to be a “shelter settlement,” gradually developing and expanding on the southern slope of the hill.
It constituted the most important settlement on the island of Tinos and served as a major economic and political center of the island until its abandonment at the end of the fourth century BC.
The cemetery lies on two consecutive terraces on a hill on either side of the burial road leading to the settlement. The tombs discovered so far on the lower terrace are for the most part covered with tiles.
Stone caskets and two sarcophagi (one clay and one stone), as well as several pots used for the burial of infants, were found in the cemetery.
Archaeologists discovered that there had also been funeral pyres between the actual graves. The dead were buried with few burial objects, but when these were found, they were usually vessels imported from Attica.
Natural, untreated stones marked the simple graves on one terrace. But other areas of the burial ground featured a number of structures of various sizes to support monuments and to serve as the bases for exquisite sculptures.