TechNews
GreekReporter.com Greece Patmos, The Sacred Land of the Aegean

Patmos, The Sacred Land of the Aegean

By Assil Giacheia
July 28, 2019
Facebook
Twitter
WhatsApp
Linkedin
Email
In ancient mythology, Patmos was known as an island under the sea. The goddess Artemis often visited the mainland across the shore from Patmos, at a place called Caria. There she met the moon goddess Selene, who shed her light on the ocean, showing the sunken island of Patmos. The beauty of the island convinced Artemis to allow it to rise from the sea.
With the help of her brother Apollo, Artemis then persuaded Zeus to bring life to Patmos. The island’s residents named the island Litois as a proof of devotion to the goddess Artemis, who was also named Litoida because she was the daughter of Lito.
Patmos is now known internationally as the “Jerusalem of the Aegean” or the “Island of the Apocalypse,” because this is where the Book of Revelation was written by Saint John, who found refuge on the island in the 1st century AD.
John had been exiled to Patmos by the Roman Emperor Domitian. The island was used as a place of exile by the Romans due to its remoteness and its precipitous, forbidding cliffs.
The Book of Revelation was written in 95 AD in the Holy Cave of the Apocalypse, where Saint John heard the voice of God talking to him, according to ancient beliefs.
The cave was later turned into a place of worship, and it is still open to travelers, who are often Christians on pilgrimage.
It is considered to be one of the most important religious destinations on the globe due to its association with the Book of Revelation. Patmos offers both devotion and mysticism, inviting everyone who visits to go on a spiritual journey.
At the same time, the island impresses any traveler with its many cultural traditions, its charming villages, and its great natural beauty.
It is a divine and otherworldly place, inviting each individual to come and encounter its undeniable spiritual, mystical aura.
Sightseeing on Patmos
Saint John Monastery
Built in 1088 by Christodoulos Latrinos, St. John Monastery (Agios Ioannis Theologos), sits high on the hill above Chora, and serves as the most important religious and cultural center on the island. It is visible from every part of Patmos.
Buildings of different ages form the Monastery, which contains 99 cells and ten chapels, as well as a library housing 890 handwritten codexes and 13,000 documents about the history of the site.

The Cave of the Apocalypse
St. John, known in the Bible as the “disciple Jesus loved,” turned this very cave into his home after his exile by the Roman emperor Domitian. Consequently, the cave became the center of his great revelation, which he dictated to his follower Prohorus. This became the last book of the bible, the Book of the Apocalypse.
The cave was declared a World Heritage Site by UNESCO in 1999.
Today, a spiritual leader or a monk can be found sitting on the rock outside John’s cave, explaining to travelers about the story of the Apocalypse and how the book came to be written. 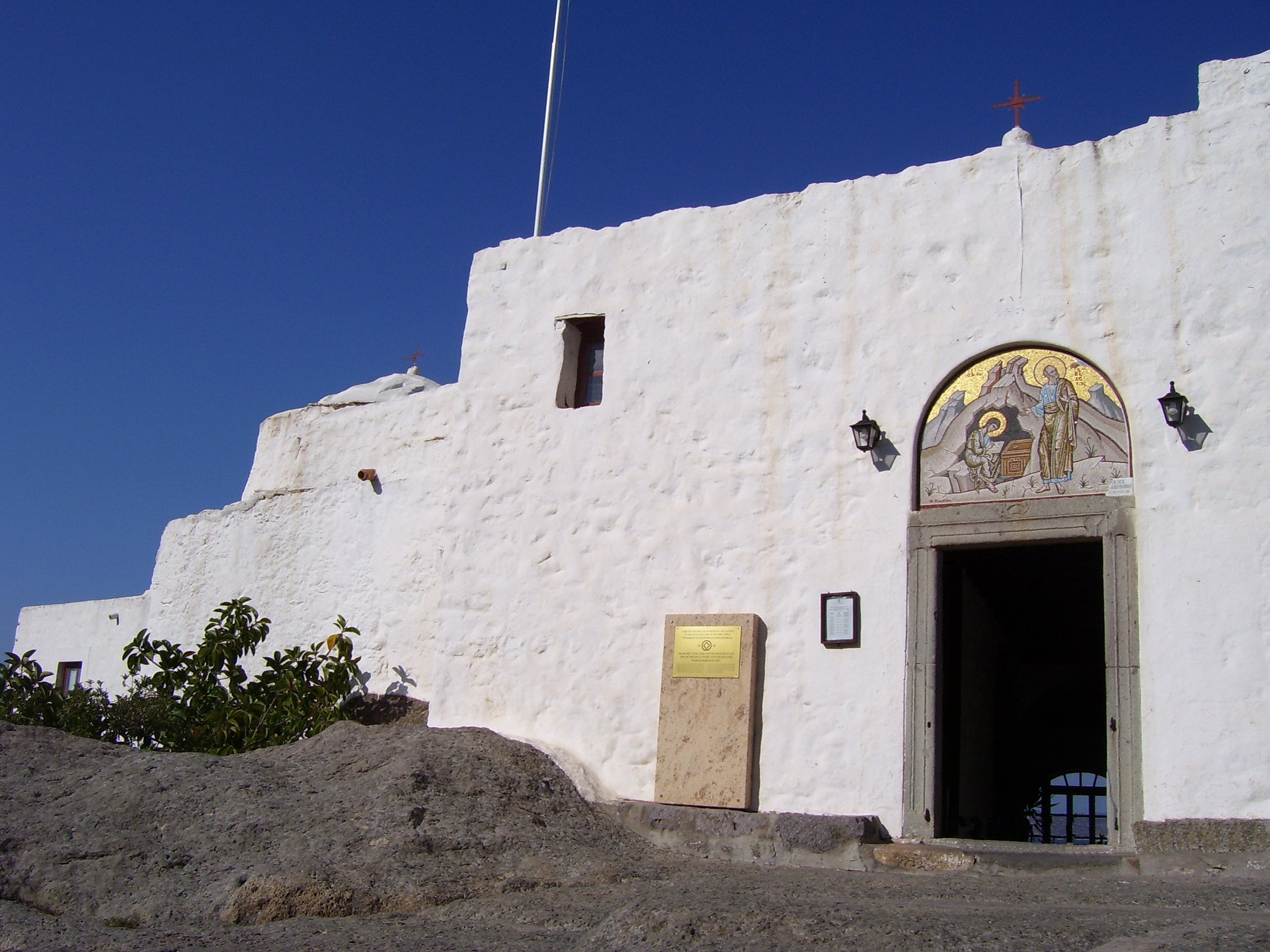 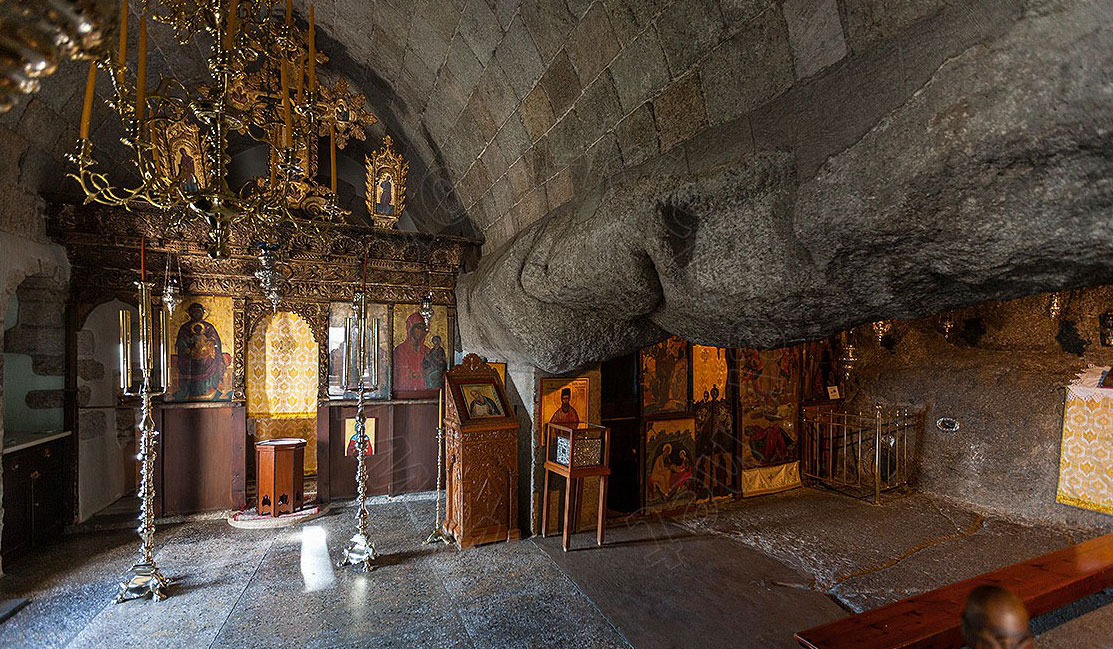 The Monastery of Zoodochos Pighi
With a name meaning “life-giving source,” this monastery was founded by the monk Parthenios Pagkostas, under the patriarch Timothy the 2nd. The Convent of Zoodochos Pigi,   located southwest of the main Monastery, was built in 1607. Presently, 15 nuns busy themselves with embroidering of clerical vestments in the convent as well as creating other needlework masterpieces.
The nuns live under strict rules at the convent but they are also involved in social welfare activities. A notable ceremony in this convent is their celebration on the Friday after Easter.

Patmian Ecclesiastic School
Founded by Makarios Kalogeras in 1713, the Patmian School is located near the Cave of the Apocalypse on Patmos Island. Also termed the General School of the Nation, the foundation of the Patmian Ecclesiastic School was the most significant event of the 18th century.
Makarios Kalogeras undertook philosophical and theological studies in the patriarchal school of Constantinople. However, Makarios’s desire to teach urged him to return to Patmos and create this school, so close to the Cave of the Apocalypse.

Ecclesiastical Museum
A small but fascinating museum, the Ecclesiastical Museum of Patmos is found on the premises of the Monastery of Saint John, atop the Chora, the capital of the island. It contains valuable manuscripts, priestly vestments, portable icons from the Byzantine and post-Byzantine times, and other items used in the Divine Liturgy.
The eleventh-century icon of Saint Nicolas is among the most important icons in the Ecclesiastic Museum of Patmos.
Folklore Museum
The Folklore Museum is a small museum that is accommodated in the residence of the Simantiri family in Chora, on Patmos. Constructed in 1625 by craftsmen from Izmir, (the former Smyrna), Turkey, this elegant mansion is still inhabited to this day.
Its lavish collection includes items from the 14th century through the 19th century. Among them, visitors can see old photographs, wooden furniture, Russian-style icons, and paintings.
The Villages of Patmos
Skala Village
Located just at the center of the island, Skala is the largest settlement and the main port of Patmos. This lovely place is constructed around the charming port and constitutes the commercial and trade center of Patmos island.
A number of sights in the settlement of Skala are absolutely worth a visit, among them the church of Panagia Koumana, the ruins of an ancient acropolis, and the seventeenth century Church of Agia Paraskevi of Cavos.


Chora Village
Found in the south-central part of the island, Chora is the capital of Patmos and a few kilometers south of Skala, the main port of Patmos.  this traditional settlement was constructed during the 12th century around the impressive Monastery of Saint John the Theologian.
The settlement of Chora flourished between the 16th and 17th century. During that time, captain’s homes and beautiful mansions were built for the wealthy families of that era.

Sunbathing and Swimming
Kampos
The cosmopolitan crystal clear beach of Kampos offers fantastic fish tavernas and sea sport facilities. This lovely bay is located on the northern side of the island.


Psili Ammos Beach
The beach of Psili Ammos (the name means “fine sand”), is only accessible by boat. This picturesque cove has very soft, golden sand and clean waters, with many tamarisk trees providing shade.

Vagia Beach
Vagia Beach includes pebbles and shady trees, offering a quiet and peaceful time for swimmers and sunbathers. It is said to have the coldest waters on Patmos, and is located 11 km southeast of Skala.

Lambi Beach
Lambi beach is covered with unusual, multi-colored pebbles. The name Lambi means shining, which was given because of the sun that reflects against the beautiful stones and the crystal waters of the bay.

NOTE: The small and mainly uninhabited islets of Arkoi are also definitely worth visiting. Catch a boat from the settlement of Skala, and make sure you visit Marathi for fresh delicious fish and crystal clear waters.
RESTAURANTS

Benetos
If you want to be enchanted by lovely views of the Aegean sea, then Benetos restaurant is an excellent choice for you. The restaurant has been operating since 1997 in the stunning Sapsila on Patmos island. It’s a great choice for a romantic dinner with its lovely veranda.

Ktima
If you want an authentic and wholesome foodie experience, then do not miss this winner. Located at Petra Beach, the restaurant is operated by two brothers, who source their vegetables from their own adjoining plots of land. This results in mouthwatering, fresh, traditional Greek food. The idyllic scenery includes a shaded terrace overlooking a vegetable garden.

Pantheon
If you want to enjoy Greek scenery at its best, then look for the octopus drying outside; hence this Pantheon’s local name “the octopus place.” With traditional blue wooden chairs and village views, this whitewashed beauty offers pure Greek fare, including seafood and homemade sweets.