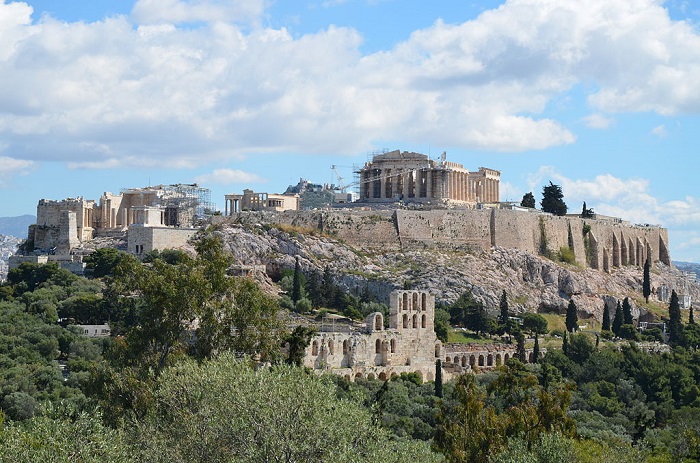 Scientists have recently expressed concern regarding the impact of climate change on ancient Greek monuments, including the Acropolis.
The extreme weather phenomena seen in recent years, as well as air pollution and acid rain, have created structural problems in the walls and temples of the Acropolis, which is still one of the best-preserved archaeological sites in Greece.
These issues were reported and discussed at length at the International Conference on the Impact of Climate Change on Cultural Monuments, which was held in the Zappeion Building in Athens last Friday and Saturday.
“The walls of the (ancient) city have more erosion than in the past,” Maria Vlazaki, the General Secretary of the Greek Culture Ministry, told the Reuters news agency after the conference.
The temple of the Parthenon, which stands on Acropolis Hill in central Athens, was built in the fifth century BC and was dedicated to the Greek goddess Athena.
Efforts to preserve and protect the Acropolis and its monuments have been ongoing for decades, an process which has been accelerated since the mid 1970’s. But the country has a vast number of other, also priceless, archaeological sites which are completely exposed to the elements.
Vlazaki also told Reuters, “Every year, we have more cases… We give more money, unexpected money to protect the walls of the (ancient) cities that had no problems before, to protect the coastal area.”


Meanwhile, the director of the French School of Athens, Alexandre Farnoux, pointed out that the inevitable damage caused by the sea, wind and rain to the archaeological remains on the island of Delos has clearly accelerated in the last ten years.
According to the Athens-Macedonian News Agency, Farnous reported there has been “serious damage to the walls, especially sensitive walls made of limestone, including the disappearance of joins and the penetration of water into the foundations of buildings.”
He noted that the rains of recent years have raised the water table, which, together with rising sea levels, has “caused the water to destructively encroach on the archaeological site.”
He explained that the Cyclades Antiquities Ephorate and the French School were collaborating in an eight-member committee which meets twice or three times a year to discuss emergency work that needs to be done at Delos.
The group has also begun working with an internet data system which collects information on problems that arise, while a 3D model created in the last year also helps them in their work to protect the monuments in the best possible manner.
The French Archaeological School of Athens has been involved in the maintenance and study of Delos since the year 1873.